Synopsis:
23 years after the last series of killings by the ancient demon known as the Creeper, a crack team of survivors assembles to hunt the thing down as it terrorises a rural farming community. 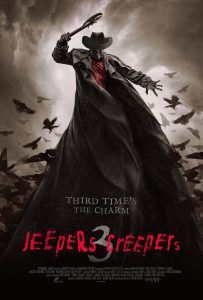 Jeepers Creepers split audience opinion down the middle upon its 2001 release, with a heart pounding and fist-gnawingly tense first act that shifted into decidedly less scary, if still enjoyable territory once its monster was revealed. 2003’s follow-up set the Creeper loose on a busload of high school basketball players and cheerleaders for a funtime horror thrill ride and to that aim, was mostly successful. The two films established a series that put its striking antagonist front and centre and, while up-and-down in its effectiveness makes for easy, highly watchable viewing. While hands down the weakest of the three, writer-director Victor Salva’s third entry is in this respect, at least consistent.

The film picks up after the events of the first film, with Brandon Smith returning as Sgt. David Tubbs, who reluctantly joins up with Stan Shaw’s Dan Tashtego and a band of other survivors from the Creeper’s last reign of terror 23 years previous to take the monster down once and for all. Taking place between the events of the first two films however, the story affords us no hope that they can succeed. The group supposedly follow the Creeper (though any sense of journeying that could have reinforced the meandering narrative is confused and messy) to the rundown farm of the elderly Gaylen (Meg Foster, unsurprisingly the film’s strongest performance), where we also meet her granddaughter and our protagonist Addie (Gabrielle Haugh), who is whisked off to her friend Gracie’s house for her own safety. Unfortunately that means she must suffer Gracie’s moronic brother Kirk and his equally moronic friends. Moronic characters are one thing however, but Kirk and his buddies’ stupidity is matched by Salva’s clumsy, expository dialogue, which sees characters pointing at and naming things (birds, bodies, the Creeper’s truck) which are clearly visible in the frame. As with the series’ previous instalment, most of the (particularly young) characters are underwritten and clichéd.

But while character and dialogue are perhaps not Salva’s greatest strengths, he does have a couple of tricks up his sleeve. He frequently uses stillness to strong effect, as soon-to-be victims prepare for the arrival of the Creeper, constantly watching the skies. Then there’s his penchant for slo-mo which, while overused massively, occasionally makes for the odd genuinely striking moment.

Jeepers Creepers 3 sets out to delve deeper into the origins and past of the Creeper, but never really gets anywhere with it. Gaylen has buried on her farm one of the demon’s hands, severed during his last killing spree, which supposedly reveals to anyone who touches it what the Creeper really is. The promise of finding out more about him is an enticing one, but we are never made privy to what characters see as the hand puts them in a milky-eyed trance, and the newfound knowledge doesn’t seem to help them any in their quest to destroy him anyway. In fact, the film is packed with such anti-climactic let downs, not least the ‘climax’ itself, which fizzles into more-or-less nothing as the story whisks itself away towards the events of 2003’s Jeepers Creepers 2. 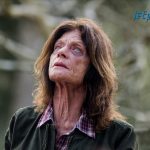 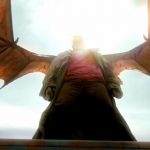 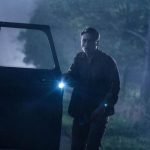 At its best when it takes us on the road (though such moments are far too infrequent), Jeepers Creepers 3 brings back all the weakest traits of its predecessors, without the tension and thrills that helped us overlook these flaws. It’s engaging enough however, and the Creeper is still an impressive villain, all gleeful menace and predatory leering as he sniffs around his victims. And while aimless, witless and, as a belated franchise entry, pretty pointless, the film should just about satisfy the franchise’s more ardent fans.

For the purposes of a film review I think it’s important to examine a film as it appears on the screen, and as such I hadn’t planned on discussing Salva’s past criminality in any form. It is hard to afford him that however, when he not only alludes to the abuse of Addie at the hands of her stepfather when she was thirteen, but includes a line from one of Kirk’s friends suggesting he understands her abuser’s motives (“Can you blame the step-dad, though? I mean, look at her”). Yes, the character is a dumbass, but given Salva’s past, it seems like either a deliberate goad to victims of abuse or an insidious attempt to normalise his previous behaviour. It’s despicable either way or at best a stupid misjudgement, and this piece of dialogue has reportedly been cut ahead of the film’s general release.