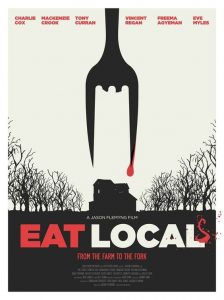 While probably best known for his work with Guy Ritchie, British actor Jason Flemyng has a long history with horror, having starred in the likes of Deep Rising, Mirrors, Seed of Chucky and George A. Romero’s under-appreciated Bruiser. All the more reason then, to be excited about his directorial debut Eat Local, for which a poster and first few stills have been released.

The film centres on Essex boy Sebastian (newcomer Billy Cook), whose promise of a night of passion with a seductive older lady becomes a fight for survival when she takes him to a secluded farmhouse to meet her friends, who happen to be a coven of hungry vampires. Unbeknownst to them, a heavily armed band of mercenary vampire hunters are on their way to crash the party.
Flemyng has assembled an impressive Brit cast headed by Cook, Daredevil’s Charlie Cox, Mackenzie Crook (Pirates of the Caribbean series), Tony Curran (Underworld: Evolution) and Torchwood’s Eve Myles. Also co-starring are BAFTA nominated actor/director Dexter Fletcher, Doctor Who’s Freema Agyeman and TV veteran/national treasure Annette Crosbie who, it must be said, looks pretty badass with a big gun. 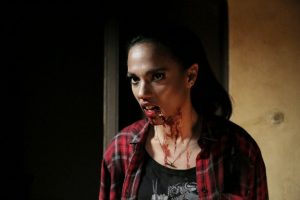 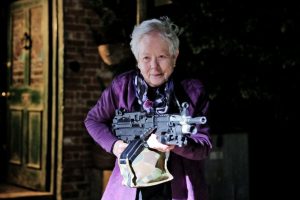 Keep your eyes peeled and your teeth sharpened for more on this one.