It seems history did not repeat itself with the release of Happy Death Day 2U. Despite the first film in the franchise raking in $125 million, the 2019 sequel hasn’t come anywhere close—leaving Blumhouse doubtful about the likelihood of a third instalment.

Responding to a fan question on Twitter, Jason Blum commented that another sequel is unlikely, but still possible.This comes after Christopher Landon, who directed both films and penned the second, expressed his desire to make another Happy Death Day movie, stating that he always envisioned the franchise as a trilogy. 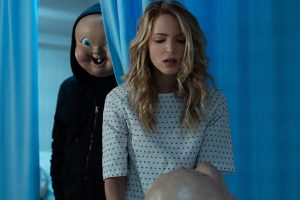 Landon teased that his idea for the third film is “really bonkers, fun,” but acknowledged that it was riding on the success of Happy Death Day 2U. The second instalment, which hit theatres in February, has still made over $50 million against its $9 million budget, but it might not be enough to secure another loop the Groundhog Day-inspired franchise.

A glimpse of Landon’s wacky idea can be spotted in Happy Death Day 2U’s end credit scene. And if it doesn’t come into fruition, as least we can take comfort in the fact that it’s probably happening one parallel universe over.