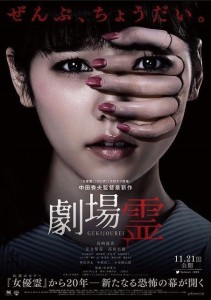 A short, sweet and spooky trailer has been released for Hideo Nakata’s Ghost Theatre and it’s laden with supernatural frights. With Japanese horror classics such as Ringu and Dark Water to his name, I am extremely excited to see what the director has in-store for us next.

Despite the trailer being in Japanese, it is still fabulously scary as it embodies all the wondrous chills we have come to know and love in Nakata’s previous work. There’s distorted bodies, ominous lurking figures and a generally spooky atmosphere. There is also some beautiful cinematography and plenty of striking imagery.

Synopsis:
A young actress, Sara, who lands a leading role in a major play, soon encounters bitter rivalry amongst her fellow cast members which escalates into out-and-out hatred.

Ghost Theatre will be released in Japanese cinemas on November 21st 2015.