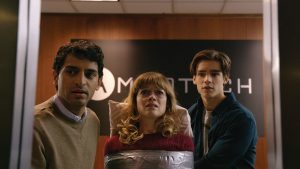 Don’t Breathe’s Jane Levy stars in zombie-action-comedy Office Uprising, which is headed to the AFM in Santa Monica next week. The film – which seems to have been sat on the shelf for a little while, with posters first released in early 2016 – sees the employees of an arms manufacturer turn into murderous maniacs after a supposed efficiency-boosting energy drink becomes contaminated.

The film was directed by Steven C. Miller (The Aggression Scale, Silent Night), from a script by Ian Shorr (Splinter, Rigged) and Peter Gamble. On production duties are Guilia Prenna (The Evil Gene) and William Clevinger (Under The Bed).

The synopsis reads like this:
An underachiever working at a major weapons manufacturing firm finds that his co-workers have been “weaponized” by a new energy drink designed for the military. He must then set off to rescue his one true love from an office building full of psychotic co-workers armed with deadly tech.