With just 8 months until David Gordon Green takes us back to Haddonfield for his sequel to John Carpenter’s horror benchmark Halloween, various onset images and promo shots have been coming our way. The most recent was shared by Jamie Lee Curtis, and it’s a rather cool portrait of Laurie Strode in 2018. Curtis tweeted the picture along with the words “Survivor. Protector.” 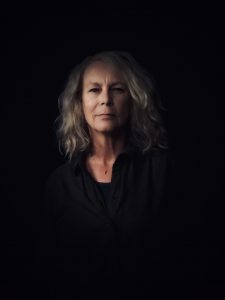 Nick Castle – one of two actors to play Michael Myers (then credited as ‘The Shape’) in the original film – will once again don that famous mask, apparently sharing the role once again, this time with actor and stunt performer James Jude Courtney.

Here are all the plot details we have for the film, which director Green co-wrote with Danny McBride:
“Laurie Strode comes to her final confrontation with Michael Myers, the masked figure who has haunted her since she narrowly escaped his killing spree on Halloween night four decades ago.”

While we know that the film is to follow Carpenter’s 1978 original and disregard all subsequent sequels, a recent casting call hinted at a hospital location, suggesting that it may at least take some cues from 1981’s Halloween II, in which much of the action took place at Haddonfield Memorial Hospital.