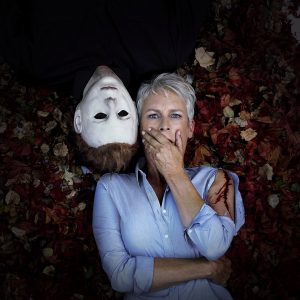 As a little Halloween treat/tweet, Jamie Lee Curtis tweeted a picture to tease her return to the Halloween franchise, in next year’s David Gordon Green-directed sequel to John Carpenter’s original classic. It’s a cool pic, which Curtis accompanied with:

Curtis is reprising her role as Laurie Strode in the film, which is due to begin filming imminently. Carpenter has been onboard as an executive producer since the project’s inception, and recently confirmed the long-standing whispers that he is to provide the score. We also learned recently that Judy Greer (Dan of the Planet of the Apes, Jurassic World) is in talks to co-star as Laurie’s daughter Karen.