Do spoilers really matter? According to James Gunn (Slither, The Belko Experiment, Guardians of the Galaxy), spoilers only matter if a film or TV show is less than impressive—and he’s got science on his side.

While it’s uncertain if Gunn is referencing a specific situation, it’s becoming an increasingly common topic of conversation; the writer/director weighed in via Twitter.

“If a movie can be ruined by spoilers, it’s not a good movie. I’m opposed to spoiling things for folks, but studies show knowing spoilers only very slightly affects the viewer’s pleasure, if at all (and sometimes increases the pleasure of a well-crafted film).”

As for these “studies”, Gunn directs interested parties to an article published in 2011 in a subtweet; Story Spoilers Don’t Spoil Stories was published on the Sage Journals of Psychological Science in 2011. In a nutshell, Jonathan D. Leavitt and Nicholas J. S. Christenfeld concluded spoilers are actually most likely to increase a viewers’ enjoyment of a story. 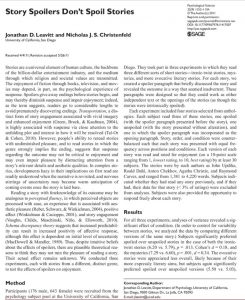 Gunn is attached to write and direct Guardians of the Galaxy Vol. 3, slated for release in 2020.