James Franco gets Experimental in The Institute Trailer

Momentum Pictures have put out a trailer for their upcoming true-life period revenger The Institute, ahead of its March 3rd release date. 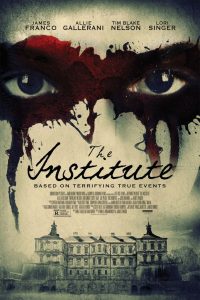 Set in 19th century Baltimore, The Institute tells the story of Isabel Porter (Allie Gallerani), who, stricken with grief from her parents’ untimely death, voluntarily checks herself into the Rosewood Institute. Subjected to bizarre and increasingly violent pseudo-scientific experiments in personality modification, brainwashing, and mind control, she must escape the clutches of Rosewood and exact her revenge, or else be forever lost.

Franco also acts as executive producer on the film, while Christa Campbell and Lati Grobman (the duo behind the upcoming Leatherface) are among the producers.

“I like to find people who I can collaborate with where we can balance out our own experiences, be it behind the camera, in front, or in a world outside of filmmaking where we can bring academia and real events into frame,” says Franco in the press release, referring to his longtime friend and collaborator Romanowsky. “I’ve been fortunate to work with Pamela on various projects over the years and felt a great relief leaving this story in her hands.”