ZOMBIELAND 2 is In the Works with Original Cast & Director 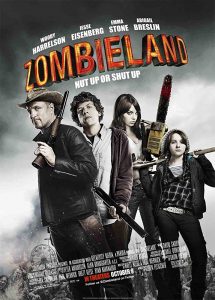 Have you been keeping up on your cardio?

While last month’s rumours regarding the test screening for a secretly-filmed Zombieland 2 in Southern California turned out to be a load of hogwash, the sequel fans have been begging for since 2009 is finally coming to fruition. As if that news isn’t exciting enough, we can look forward to seeing all of the original cast reunited.

“It’s official. Emma Stone, Woody Harrelson, Jesse Eisenberg, and Abigail Breslin have all signed up to return Zombieland with the original film’s director Ruben Fleischer also on board to direct the film for Sony Pictures. Fleischer, the director of Sony’s hotly anticipated Venom standalone, is re-teaming with the writers from the first film, Paul Wernick and Rhett Reese.”

The production is tentatively slated to begin shooting in January targeting an October 2019 release date (hardly coincidentally timed to coincide with Zombieland’s 10-Year Anniversary). So, did Columbus and Wichita fall in love? Did Tallahassee find his Twinkies? Has Little Rock found her own (living) love interest? Time will tell!

If it’s been a while, check out the trailer and synopsis for 2009’s Zombieland below.

Synopsis:
After a virus turns most people into zombies, the world’s surviving humans remain locked in an ongoing battle against the hungry undead. Four survivors — Tallahassee (Woody Harrelson) and his cohorts Columbus (Jesse Eisenberg), Wichita (Emma Stone) and Little Rock (Abigail Breslin) — abide by a list of survival rules and zombie-killing strategies as they make their way toward a rumoured safe haven in Los Angeles.

Also, check out the trailer and synopsis for Fleischer’s Venom, arriving in US theatres on October 5th.