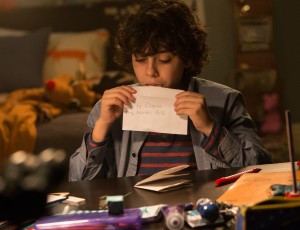 Christmas is just around the corner and to get you in the spirit, we have the trailer for horror-comedy Krampus to share with you.

Synopsis:
When his dysfunctional family clashes over the holidays, young Max (Emjay Anthony) is disillusioned and turns his back on Christmas.  Little does he know, this lack of festive spirit has unleashed the wrath of Krampus: a demonic force of ancient evil intent on punishing non-believers. All hell breaks loose as beloved holiday icons take on a monstrous life of their own, laying siege to the fractured family’s home and forcing them to fight for each other if they hope to survive.

Written and directed by Michael Dougherty (Trick ’r Treat), Krampus looks like a hilarious, but equally as terrifying festive treat! My favourite part is the sinister jack in the box; I dread to think what pops out of there. We have some images for you to have a look at below, too, and they look wonderful. The image of the Krampus looks like it’s been pulled straight out of a Guillermo del Toro film, beautiful!