Italian Horror The Church Gets a UK Blu-ray Release

For the first time, the classic Italian horror The Church (La Chiesa) has arrived on Blu-ray in the UK courtesy of Shameless. Originally released in 1989, directed by Michele Soavi and written by Dario Argento, The Church follows a group of people trapped inside a Gothic cathedral while 12th century ghosts try to resurrect an ancient demon. 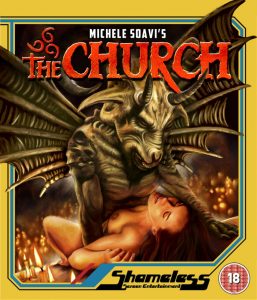 The Church is an expectedly shocking and features a fantastically fitting score from Keith Emerson and Goblin. The visuals are also extremely impressive, but are without the exceptional colours typically associated with Argento’s Italian horror cinema.

The collection comes with an exclusive interview with director Soavi and a trailer park for other Shameless film releases, so it’s a bit light on special features, but the 2k restoration is enough to get us excited.