Synopsis:
In Derry, a group of children who call themselves the Losers Club vow to put an end to an ancient shape-shifting demon that typically adopts the scary guise of Pennywise the Clown and hunts the town’s children. 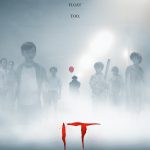 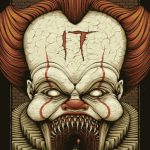 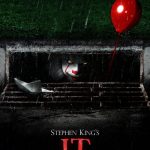 Until this year, I had neither read Stephen King’s It or seen the mini-series based on the story. Now, I’ve read the book, seen the mini-series and 2017’s latest first chapter of the story and what do I think? The book is a fantastic, if somewhat bloated coming-of age horror story that I highly recommend you read. The mini-series was a confusing and messy adaptation that owes its success to a striking performance from Tim Curry. The latest is a near-perfect re-telling that is not without its flaws, but manages to keep to the spirit of the novel by focusing on the friendship of the Losers Club. With lashings of comedy and horror alike, Andy Muschietti’s It is sweet, scary and breathlessly entertaining.

I don’t want to argue that It is a ground-breaking new direction for horror or that it’s box office success has somehow saved the genre. Horror was never dead and nor was it ever close to demise. However, what It’s success should do is prove to critics, audiences, film studios and those who somehow thought horror was a dying breed, that R-rated horror is wanted and that people will show up in droves to watch it. We already knew that horror films could make money, but It shows that horror films with few jump scares and those that don’t rely entirely on frights can do damn well. For all its sheer terror, It is a heart-warming, funny and tragic horror film that will scare you silly, but it will also get you to laugh and feel emotions that are not always associated with the genre.

On its most simple level, It is a chilling tale about a clown that eats children. However, for those who after simple frights and the desire to lie awake in a cold sweat, fearful that Pennywise is going to materialise in the corner and entice you into to his Deadlights, will probably be disappointed. As with the mini-series – and the novel – It is not solely about giving its audience nightmares. Sure, the film administers well-timed and frequently surprising scares, but this is a coming-of-age tale more similar to Stand By Me than Cujo. The sprinkles of horror are outweighed by heavy themes surrounding grief, abuse, love, revenge and survival, ensuring that It’s horror lies within the grasps of reality, rather than exclusively in the outskirts of fantasy. It’s frights are real and more often than not, the horrors of real life are far scarier than those that lurk in fictional monsters and ghosts that haunt your nightmares.

Muschietti’s vision of It shines a searing and necessary light on its young protagonists the Losers Club lead by Bill Denbrough (Jaeden Lieberher) and focuses on the struggles of growing-up as an outsider, targeted by bullies and misunderstood by your parents. All the while, a damn demon is targeting those around you. It’s co-written script equally hones in on each of its characters. From poor Bev Marsh (Sophia Lillis) whose father won’t stop “worrying” about her to the joker of the pack Richie Tozier (Finn Wolfhard), we get a wonderful insight into each child and they are painted equally as intricately as the last. Every actor shines in their role and it is impossible to single out any one as being stronger than the other. This time it is not Pennywise who propels this re-imagining, but the young ensemble cast who give their hearts and souls to their performances, ensuring that we fall in love with each and every one of them.

The film may be lead by the thoughtful depiction of the Losers Club and the young actors that portray them, but Bill Skarsgard’s Pennywise is far superior to Tim Curry’s portrayal. Sure, he’s a goofy and dribbling mess at points, but the executed frights that focus on him truly showcase the demon’s shape-shifting abilities in ways that will effortlessly terrify. Rather than entirely focusing on expected jump scares and cheap moments that exemplify loud noises, the fears in It come from the almost unexpected. You’ll think you’ve seen a few of the main scares in the trailer, because many horror films do showcase their best moments in this way, but believe me when I say, there are plenty more waiting for you. It’ll will have you gawping in terror one moment and then laughing the next, but It is a horror film in the purest sense.

There is lots to love with It, but one thing that ensures it escapes perfection comes down to its lack of cosmic exploration. For those that are familiar with the story and King’s novel in particular, you’ll understand that It’s origins lie in a place that is difficult to explain. The mini series proved it was difficult to present these ideas on screen and it’s understandable why Muschietti’s version side-stepped the complexities almost altogether. However, the cherry on top of the cake would have been an accurate and coherent visual representation of It’s more other-worldly ideas. Hopefully the sequel will touch further on these ideas and do more than hint at that turtle’s whereabouts in subtle Easter eggs for eager-eyed – and eared – viewers.

It is an expertly crafted tale of horror that uses its original material to its advantage; picking and choosing moments that it wants to ignore and adapting the story to a new place in time. You’ll jump, you’ll scream and you’ll laugh out loud, because It is superb and easily earns its place as one of the best horror novel adaptations ever made.