You know you’re going to get something of an eighties vibe when the story begins with a comet crashing to earth. And, you know you’re getting a horror book when said comet burns two swimmers to a crisp. This particular comet contains a parasite that finds its way into a 20 foot, 2500 pound shark. Crystal Key, a peaceful island off the coast of Florida,  will never be the same.

Reggie is sent to Crystal Key to stay with his dad, Luther, while his mum vacations in Europe. This remote tourist island with crappy WiFi does not sound like fun. As he ferries from the mainland he meets Manuel, a gangster eager to get out of the business, who’s agreed to do one last job on the island. The author introduces us to a number of the island residents creating an interesting cast of characters. The island is a mix of locals and tourists staying at the Shifting Tides resort. Rand Hamilton is the resort owner who only cares about the bottom line and not upsetting the guests. His deplorable attention to profit is almost to be admired.

What was an island paradise becomes besieged. Communications are all down. A hurricane is baring down and the island is being blockaded by a mysterious private military ship and terrorised by the bloodthirsty shark. Things get even worse when the parasite spreads from the shark to its victims and then into the island’s general population. Along with all this, we also have a hunt for a missing girl who disappeared even before all the craziness began. 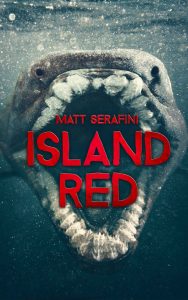 For the first half of the book, the author plays on our primal fear of the sea, being out of our element, and creates lots of tension and mystery. The second half has a great Night of the Creeps or Slither feel, and the action ramps up as the the private militia becomes more involved. There is plenty of fun gore and grossness. My favourite kill was potentially a nod to Fulci, and I’ll leave it at that. We get some of the story from the shark’s point of view, which is pretty cool. I even had some empathy for him.

So as you can tell, there is a lot going on in this story – possibly a bit too much if I’m honest. The sheer number of threats make things a bit chaotic. The individual ideas are really strong but the sum of them all together makes them a bit weaker. I really liked the militia when they weren’t so involved – mysterious and in the distance. The book is a blast though and I did enjoy it. I’d really like to see more stories based around the parasites. I see the potential for some great follow up. Take a trip to a tropical island from which most will never leave.