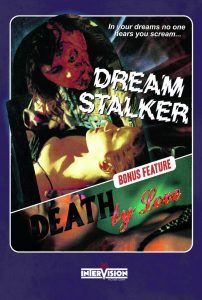 While bespoke blu-ray labels keep digging up fondly remembered flicks from the golden age of trash and exploitation for their latest releases, films from the ‘90s shot-on-video boom remain relatively  obscure and unexplored. Hoping to change this are revived label Intervision, a key player on the ‘80s VHS market who put out any number of horror gems from Carrie and Rabid to Maniac and Mark of the Devil. The cult label is bringing two forgotten flicks from the back of the video store shelves to DVD for a gloriously demented double-feature.

First up is Dream Stalker, a psychedelic slasher weirdy from director Christopher Mills, who went on to a successful sound department career, recently working on the likes of The Walking Dead, Cell and Creed. It tells of a young model whose dead motocross racer boyfriend comes back to hunt her through her dreams, just as a series of other young women meet grisly deaths.

Intervision’s set also includes the truly obscure Dallas-shot psycho-thriller Death by Love. Written, directed and produced by Alan Grant, it also stars Grant as a sculptor who fears that a devil-worshipping former school friend is plotting to murder his girlfriend.

Both films are packed with scattershot performances, bizarre plotting, gratuitous nudity and plentiful gore, and represent a real snapshot of an era when DIY filmmakers were pushing all known cinematic boundaries in order to get their work noticed. Not only have Intervision dug out the films, but they’ve somehow managed to track down some key players for a host of extras, listed below. The DVD will hit shelves on April 11th.