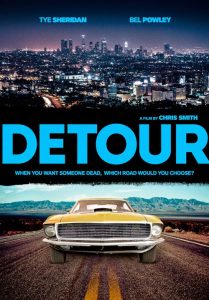 Since catching his disturbing debut, Creep, back in 2004, I’ve always been an unconditional Christopher Smith fan; whether it was the mind-bending nature of Triangle, the team-building terror of Severance or the disquieting devilry of Black Death. Heck, I even can’t get enough of his absolutely unexpected but infinitely enjoyable Christmas caper movie Get Santa – one that gets popped into our family DVD player every festive season. Having got the family friendly filmmaker bug out of his system, die hard fans of his earlier output will be happy to hear that a return to his darker self is upon us with the noir thriller, Detour.

A cunningly structured tale of deception and murder, Detour stars Tye Sheridan as Harper, an outwardly credulous law student who can’t shake his suspicions that his stepfather had something to do with a car crash that left his mother in a coma. Hitting the bars to drown away his sorrows he strikes up a candid conversation with a shady character only to find himself unwittingly entering into a pact to “take care” of his stepfather.

With Detour releasing in the U.S. from the 20th of January, before going on to screen as part of this year’s FrightFest Glasgow lineup, we caught up with Smith to discuss his return to the genre and the real lifeblood of Detour’s twisting, split narrative formula…

SCREAM: Your previous film, Get Santa, was very much a spur of the moment thing that you came up with whilst sat in a bar drinking the odd cider or three. I read that it took you 4 years to prepare Detour so I’m guessing a lot less time sat in bars sipping on cider was involved.

Christopher Smith: (laughs) It wasn’t really 4 years to prepare exactly. I thought of the idea in 2007, just after finishing writing Triangle. I had the structure and the story of what would happen in the movie but, because I’d just got off the back of making a really structural movie, I didn’t feel I could write it at that moment. I just wasn’t in the headspace to actually sit down and do it. I ended up filming Triangle and then straight after I was offered Black Death and then Ridley Scott loved Black Death and I ended up working with him and I pitched Get Santa to him. So I basically parked the idea for Detour, and before I knew it about three of four years had gone by before I even sat down and thought about writing it. And then it wasn’t actually that hard to write once I got going. It probably took me about three drafts.

SCREAM: The film is told in a split narrative formula and in an interview you conducted when the film screened at Tribeca you mentioned how the real star of the film was the main character’s paranoia as a result of committing a heinous crime. You also commented on how the split narrative plays out as a metaphor of sorts to emphasize how anyone who’s committed a horrific crime would be mentally tormented over and over again by whatever it is that they’ve done. Where did the decision to focus on that come from? Did it come from a personal place?

CS: It’s interesting that you say that because, for me, Triangle was about guilt and about living things over and over again. I wouldn’t say it was from a personal space but I’m very interested in the idea of this movie that is, “If you want to kill somebody, dig two graves: One for the victim, and one for yourself.” A lot of people coming back from war, the post traumatic stress disorders that they are dealing with and the reason you get alcoholics and people with mental health issues is often because they’ve done something which felt like it had a meaning and it was right in the moment they did it. Maybe they shot this guy and it felt right in the time but then the rest of their life they realise that they probably didn’t need to kill them. So they live with that decision for the rest of their life and I guess that’s what justifies the split narrative in Detour.

SCREAM: The film’s ending is best described as more of a reveal than an actual plot twist. Audiences are renowned for getting on their soap boxes to complain when they feel duped by cheap tricks rather than solid twists (in no way am I implying that that’s the case in Detour) so I’m guessing this was something you were particularly conscious of when writing the script.

CS: The film plays the twist but I was aware very early that it was going to be one of those things where you end up going, “Ohhhh. Right. Clever!” It’s that kind of twist. It’s not, “Oh wow,” you know? It’s as much of a twist as you want it to be because some people can get it straight away. The risk with these split narrative films is that you’re trying to figure out which of the stories it’s really meant to be so, for a while, the story can get somewhat frustrating and I tried to balance it knowing that when it does do that, straight after we’re going to reveal that, “Don’t worry! It’s going to be this instead.”

SCREAM: These styles of films are very much part of the zeitgeist at the moment which I guess works very much in your favour. I’m particularly thinking of things like Nocturnal Animals and Arrival.

CS: It’s so interesting that you mention that. I’ve said this every time I’ve ever done something. We’re all making the same movies. If you look at when I made Severance, everyone was making what was called at the time torture/porn movies. Then, when I did Triangle we had Vigalondo’s Timecrimes and things like that. All these films were made totally independent of each other and we didn’t know each other. And I really felt that exact same thing when I saw both films you just mentioned. I really felt that what were dealing with here is not that split narrative is used as a hook but more that the technique is related to memory and guilt. I though both of those films were great. 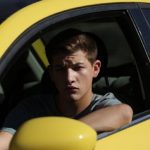 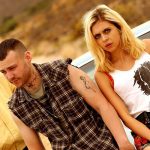 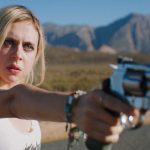 SCREAM: Your three stars were relatively unknown in Hollywood but that couldn’t be farther from the truth now.

CS: The first actor we got was Tye. I saw him in Joe and I thought his performance was on a par with DiCaprio in What’s Eating Gilbert Grape and then I saw him in Mud and I was just obsessed with the idea that he can carry weight in his eyes.

SCREAM: Something that works very much in your favour in Detour.

CS: Exactly! A lot of the time I thought that this kid doesn’t do anything and he’s just there but really knows how to express so much by behaving in a certain way. He’s got an old soul has Tye. He’s a lovely kid but MY GOD, I’m 25 years older than him and when I’m with him it feels like we’re both the same age. He’s got a real depth to him.

SCREAM: And then we have Bel Powley playing Cherry, who I read you weren’t entirely convinced on for the role when she was suggested, right?

CS: What happened was that no one had seen Diary of a Teenage Girl and the Casting Director said, “Apparently this girl, Bel Powley, who I think you’ll love Chris, is great in this movie but no-one has seen it.” This was before Sundance so there were rumours coming out that she was great and a friend of the Casting Director had seen some of it and said she was great. So I met her in a bar in London and I literally thought she was amazing so I just said to the financiers, “If you guys are up for casting her then I would love to have her.”

And then when I did get to see Teenage Girl, I was literally so blown away so what I was trying to say in interviews was that I would have been nervous because of what she had done. But to me, she was a complete unknown and I felt kind of like, “My God. You’ve had this whole other life before we met where she’d made that film.” And before that film came out, she had not tasted anything like the sort of stardom that she is now tasting so it was sort of the last moment before she got really big recognition. I thought she was incredible in that film. I also felt a bit embarrassed because she spent the whole movie nude. Do you know what I mean? (laughs) I was implying I was glad I hadn’t seen it until I’d finished filming because maybe it would have been a bit weird. (laughs)

SCREAM: Another inspired bit of casting comes in the form of Emory Cohen who I understand you only brought in a few days before you began shooting.

CS: Yeah. That’s right. I’d seen him in The Place Beyond the Pines and I thought he was incredible in that. There’s always a financial thing and the producers want somebody and people often say to me now, “How did you get these three young stars? They’re all brilliant.” Obviously we wanted a huge name and when we shot this film about two and a half years ago these kids were all on the trajectory but of course Bel’s film could have not worked and we could have ended up with people that nobody knew so we were holding out for as long as possible to find just the right person to play Johnny Ray.

SCREAM: And I think you were originally looking for someone 10 to 15 years Emory’s senior.

CS: Yeah. I was thinking that he needed to be the oldest one for this film to work. Weirdly, when I got on the phone with Emory I suddenly thought, “You know what? It’ll play really nicely if all three are all young because what they’re doing is absolutely ridiculous.” It feels more credible for this to be a blind passion story.

SCREAM: I know when you were in talks with Ridley Scott before doing Get Santa you had originally met with him to discuss a sci-fi project you had in mind. Is that your next move or are there other things you’ll be focusing on first?

CS: I’ve got two films I’m working on at the moment. One of them is a thriller called The Undertaker which has a sort of John Frankenheimer ’70s vibe to it. I’m doing that and I’m doing a little horror movie called The Judas Goat. Hopefully one of these two will shoot this year.

We thank Christopher Smith for talking to SCREAM and strongly suggest you check out Detour when it releases in the US on 20 January, before it heads to Glasgow to screen as part of this year’s FrightFest lineup. We’ll leave you with the latest trailer courtesy of Magnolia Pictures and Magnet Releasing.