Inside Remake Gets a US Release Date 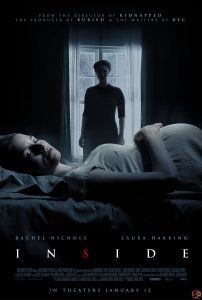 Despite screening at 2017’s Horror Channel FrightFest and the Sitges Film Festival back in 2016, the English-language remake of Inside has not made its way to the UK or USA yet. However, this is all about to change as the film has sealed a US release date on 12th January 2018. Our friends in America will finally get to see Migel Angel Vivas’ interpretation of the brutal French classic from 2007. Hopefully a full UK release will follow soon.

It’s a so-so remake and mediocre re-telling; nothing to get particularly angry or excited about. As expected, it’s nowhere near as harrowing as Julien Maury and Alexandre Bustillo’s original and Laura Harring’s Woman is no match for Beatrice Dalle’s depiction. It’s worth a watch if you can get your hands on, even if only to reassure and remind yourself how awesome the 2007 original is. Check out our review here.

Synopsis:
A woman in her third trimester of pregnancy is stalked by a stranger who is obsessed with her unborn child.

Inside further stars Rachel Nichols and Stany Coppet. The film will receive a limited release in the USA from 12th January 2018.