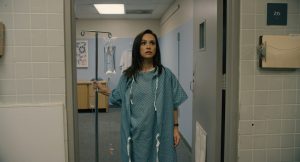 The film, which had a US theatrical release last month, sees Harris wake in an empty hospital, where she must battle both supernatural forces and adverse weather conditions if she is to escape.

Synopsis:
A young woman wakes up in a seemingly evacuated hospital with a hurricane approaching. She realizes the storm has awakened malevolent forces, trapping her in a time loop. She must escape the hospital before the storm passes or she will be trapped in its halls forever.

Inoperable co-stars Katie Keene (ClownTown), Jeff Denton (The Hitchhiker) and Cher Hubsher (The Amityville Terror). Chapman – who also produced ClownTown – directed from a script by himself and Jeff Miller.
The film will be available on DVD, Cable VOD and Digital HD from February 6th.