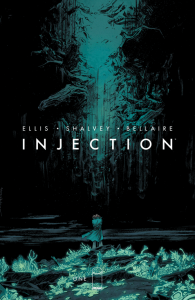 At its best, horror has always been most effective when reflecting a cultural fear of a particular time period, such as vampires and werewolves as metaphors of aggressive male sexuality. It should come as no surprise then that our reliance on technology conjures up its own inherent anxieties – most notably seen in films like Videodrome or 2001: A Space Odyssey. Injection is the latest comic to explore these themes, but though exquisitely illustrated, Injection is a mess of ideas that never really gets off the ground.

The story is about five technological geniuses who have been placed in a mysterious program known as the Cultural Cross-Contamination Unit. Believing them capable of positively changing the future, the British government give them unlimited time and resources to explore artificial intelligence. But inevitably things soon go wrong, ending with the five main characters creating a sentient life-force intent on destroying the human race. At least I think that’s what happened. The story – buried somewhere beneath conversations about synthetic sandwiches and murderous pixies – isn’t particularly easy to follow, and the paper-thin characters mean that we don’t particularly care either way.

Warren Ellis has always been a divisive figure in British Comics, but Injection highlights his worst traits as a writer. It’s sharp and intelligent, and poses some genuinely interesting questions, but Ellis does this at the expense of everything else. The characters, who spend their time walking around pensively and pontificating about the universe, are never given any space to develop, meaning that the audience is indifferent to the dangers they face. Admittedly this may change in later volumes, but after five issues, the only thing I could glean about the main characters is that they all have a penchant for trench coats. 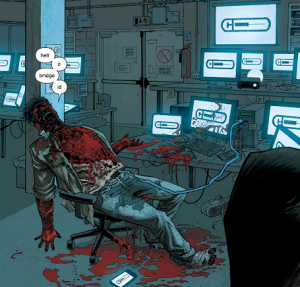 But if Injection has a saving grace, it’s to be found in the artwork of Declan Shalvey and Jordie Bellaire, whose illustrations are equally haunting and elegant. Scenes are often beautifully lit, and the sparse compositions add an eerie quality not always present in Ellis’ prose. The end of issue five, in which a group of archaeologists transform into monsters, is a great example of light and shadow, leaving just enough to the imagination.

Ultimately, Injection is an interesting idea, and one that has a lot of potential for future issues – even if Ellis withholds too much information for us to really invest in the characters. Fans of crime, police dramas or so-called ‘techno-thrillers’ might find this a rewardingly head-scratching affair, but for me, Injection fails to get under the skin.