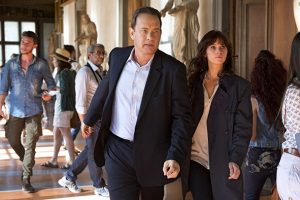 Synopsis:
When Harvard academic Robert Langdon (Tom Hanks) wakes to find himself in a hospital in Florence, with no memory of how or why he comes to be there, it is up to a local doctor, Sienna Brooks (Felicity Jones) to help him remember his identity. Then there is the strange phial in his pocket. A phial which they soon discover holds the key to Armageddon, and which some particularly nasty individuals are keen to obtain no matter what the cost.

Dan Brown – the phenomenally successful writer behind such bestselling airport pulp as The Da Vinci Code and Angels & Demons – would appear unable to write anything which can’t be transferred to the big screen with instant, commercial success. The blockbuster film interpretations of his mega-sellers may not be the kind of works to win major awards. However where providing instant audience gratification is concerned, these films cannot fail to succeed on a monumental scale. And such is the case with Inferno, the latest of Brown’s adventures featuring Robert Langdon, professor of religious iconology and symbology (which, before you check, is not a real field of study). Inferno does not veer greatly from the formula laid down by The Da Vinci Code and Angels & Demons – the secrets to divert some form of catastrophe on a global scale are hidden within ancient buildings or works of art: after-all why change a successful pattern if it isn’t broken?

If this was purely the case, though the film might be good for a couple of hours escapist fun, the result would ultimately amount to little more than a freshen up of what had gone before. What works this time round however, making this into a – at times – genuinely unsettling horror tinged thriller, is the use of the poet Dante’s infernal poem which depicts Hell in all its multitudinous and fiery glory. Here the poem’s characters leap from the screen in vivid depictions, creating abrupt, visual interjections during the oft frantic proceedings: the visions which haunt Tom Hank’s university professor and make his life a waking nightmare, are wonderfully brought to life on screen, making for some vividly realistic interpretations of Dante’s poetic nightmare. 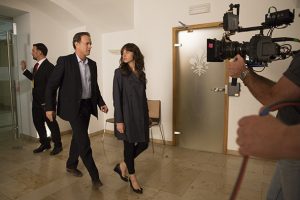 Not to beat about the bush however but, if honest, little else of real depth happens in the film. It is – like most of Brown’s books – not much more than a glorified treasure hunt, with various characters, each seemingly intent on knocking the others off, whilst trying to discover a hidden ‘treasure’ of sorts which could have catastrophic effects on the human race.  The origins of all this madness usually stem from a misguided megalomaniac – believing in the case of Inferno, that what he is doing is for mankind’s longterm benefit – who wouldn’t look out of place in a Bond movie. Which of course is what this film really is. As the Bond franchise plods on interminably year to year, from one exotic location to the next, filmmakers are constantly on the lookout for a new, fresh hero to save the world from cataclysmic destruction. Enter Brown’s Harvard based boffin, the embodiment of whom Hanks seems to have made his own.

Hanks may not exactly be fresh, however he manages – just about – to keep the pace going for the film’s duration. Though, at points, Hollywood’s ageing golden boy looks in danger of running out of puff, he does stay the race until the end which in true Hollywood style leaves the cast, and viewers, gasping for breath. As for Hank’s support – which includes strong efforts from such well known names as Jones and Ben Foster amongst others – well, let’s be honest, they’re really only there to make Hanks look good. Play this all out against some stunning Italian and Middle Eastern locations and the scene is set for action scenes which would make 007 himself weep: to reveal that a painted ceiling in a Florentine museum is used for a spectacular exit is hardly likely to spoil the fun as, the minute you see it, you’ll know that it couldn’t have been introduced to the storyline simply to create a pretty backdrop. 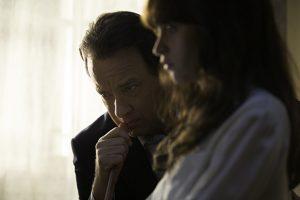 When it boils down to it, Inferno is really little more than a Bond or Bourne film, given an academic twist – a one trick pony, extended to breaking point, whilst retaining your attention through its sheer non-stop adrenaline rush. Having said that, with some genuinely creepy characters, Hellish visions and a possible outcome of apocalyptic proportions, there is plenty here to satisfy, even if you don’t need a doctorate in cryptography to decipher the obvious end long before it arrives.