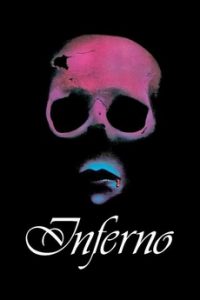 Inferno – the second instalment of Dario Argento’s Three Mothers trilogy – was released to modest acclaim three years after 1977’s Suspiria. Compared to its predecessor, the film was considered to be something of a failure, deemed a much more predictable and unexciting piece of work by reviewers at the time. Although this isn’t entirely fair, Inferno’s reliance on dream-logic makes the film difficult to enjoy for people interested in linear storytelling, and a knowledge of Freud and basic psychoanalysis is required to make sense of the film’s strange self-reflexivity.

After the disappearance of his sister, Mark Elliott (Leigh McCloskey) travels to her apartment in New York, unaware that the building is also home to an ancient witch, Mater Tenebrarum, the Mother of Darkness. With the aid of fellow resident Elise De Longvalle Adler (Daria Nicolodi), Mark begins to hunt for clues, all of which lead him deeper and deeper into the building, and closer to Mater Tenebrarum herself.

The main problem with Inferno, particularly when compared to the nightmarish Suspiria, is just how boring it actually is. The plot crawls along languorously, and there isn’t nearly enough narrative to justify the two-hour runtime. There are long shots of people walking down corridors and looking around rooms, but these fail to establish a sense of character or place; they barely even help build tension. Unlike Suspiria, Inferno often feels like Argento is simply stalling for time between murders.

But looking at Inferno in this way is like complaining that the characters in Suspiria are two-dimensional; you end up missing the point entirely. Both films use fairy-tale structures and dream-logic to tell archetypal stories, and Inferno is probably the best example of this within Argento’s oeuvre. The script is filled with polysemic riddles and mysteries, and many scenes appear to have sprung directly from a dream, adding to the oneiric tone of the film as a whole. When Mark’s sister drops her keys into a puddle in the cellar floor, she descends into the water to find a submerged ballroom beneath the house. This sequence can be read as a metaphor for the film itself, as the key to understanding it can only be found by descending into the realm of the unconscious. When Rose comes back into the cellar, the film feels different almost immediately; from here, Inferno’s language is entirely made of metaphor.

Similarly, the film is also Argento’s most elemental, bookended with water and fire respectively. If Inferno begins with Rose submerging into the unconscious realm of water, then the film ends with Mark’s trial by fire, where he faces down Mater Tenebrarum in her guise as death itself. In this way, Inferno operates on a coda of images and symbols, a structural adumbration that forces the reader to interpret it. There are no conclusions to be found in the film, and like a dream or a nightmare, it is up to the viewer to decide how to decode Argento’s imagery.

Although the technical aspects of the film are largely beautiful, the music pales in comparison to Argento’s other works, with the aimless pianos and clunky prog-rock failing to make much of an impact. Besides the fantastic use of Va Pensiero from Verdi’s Nabucco, Keith Emerson’s score is mostly forgettable, often distracting from the action on screen. In the same way, the abrupt cuts between loud music and resounding silence are often more jarring than atmospheric. 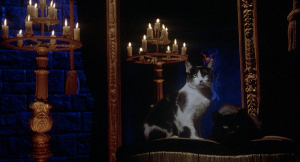 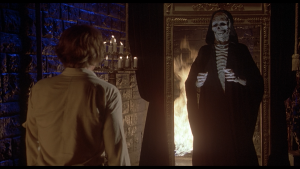 Of all of Argento’s films, Inferno is the one I find most disappointing, mainly because it has the potential to be just as good as its predecessor. Like Suspiria, the experience of watching Inferno is like being trapped in a long and difficult nightmare, but without sharp editing and a linear narrative, Inferno often loses focus, making whole sections feel rote or out-of-place. For horror fans solely looking for entertainment, Inferno isn’t the best place to start, but for those who don’t mind the act of decoding metaphors and symbols, the payoff is well worth the effort.