Subterranean Press brings us Infernal Parade, the latest offering from legendary author, Clive Barker. Similar to Tortured Souls, these are the back stories to a range of McFarland figures created in conjunction with Clive Barker. These stories, originally crafted for the 2004 release of the figures, are now brought together into one complete collection.

The infernal parade is to be a group that will shake man from his complacent state and strike fear into all. Barker brings us six tales for the six fantastical figures that make up the infernal parade and how they came to join up.

First is Tom Requiem, a trickster who could be anything to anyone. His time of manipulating people and the fabrications about his life have come to a close. He is to pay for his crimes, prosecuted as a murderer, with his head. The underworld has other ideas. He has been chosen to lead the infernal parade. The second chapter introduces us to Tom’s victim, Mary Slaughter, a now undead master of blades. Her skills are quite spectacular. Next we meet a powerful Golem, followed by Doctor Fetter’s Family of Freaks. Through Doctor Fetter, Barker shows us the theme familiar throughout his work – that of man being the true monster and the abnormal the victims. Next up is Sabbaticus, a reptilian and murderous beast. Finally, we are introduced to Bethany Bled, a woman whose need for love leads her to torture and a place in the infernal parade. 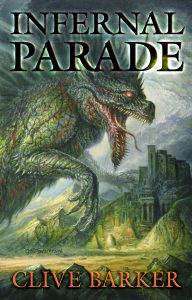 Barker has created a new world and the glimpses we see show a society of industry and squalor. There are hints of tyrannical religious governance. This is a harsh and broken society. Barker presents this with his usual mastery of vivid imagery and place. There is plenty of almost biblical gore and violence throughout. We have the origin stories of all these wonderful characters and it left me wanting to see what they could do together as the infernal parade. I would love a follow up to this and it begs for a full-length novel. This is quintessential Clive Barker and highly recommended.