Synopsis:
A man wakes up in a square of an unknown city again and again, after each failed attempt to escape four masked assassins. Though the never-ending chase, he tries to recover his identity, and find out who set him up. 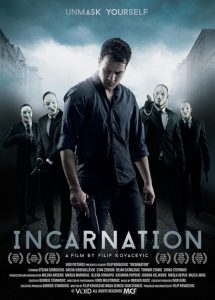 Despite sharing the same mechanics as The Edge of Tomorrow and, in some respect, The Bourne Identity, Filip Kovacevic’s feature debut action thriller Incarnation plays out more like a video game rather than the adrenaline-fueled thriller that it strives to be. Combining flashy cinematography and fast-paced chase scenes Kovacevic’s efforts give Incarnation a slick style but as a whole, it doesn’t quite manage to harness the power of its action sequences.

In it, Stojan Djordjevic plays a man who finds himself waking up on a bench in the middle of a busy stretch of a city square. There’s very little we get to know about him before he is hunted down and killed by four men wearing white masks. Restarting his day from the same spot, he takes a different path only to meet the same fate. After realising he is stuck in a loop, he begins to search around for clues to recover his identity and find out why he is being hunted. In his performance, Djordjevic is pretty decent. He is great to watch and can clearly handle the physical demands of the role with ease.

Meanwhile, in the director’s seat, Kovacevic does his best to deliver a taut thriller and delivers a film which looks great on-screen thanks to some solid cinematography. Almost every frame is deliciously composed and the accompanying soundtrack fits like a charm. However, no matter how technically sound the film might be, Incarnation’s action scenes leave plenty to be desired as every action scene is badly executed and the violence is watered down in comparison. So when you consider the fact that this film is only 72 minutes long. This becomes a problem. 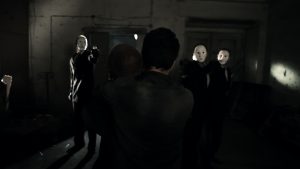 One of the biggest issues with this film is that there is no attempt to develop a sense of threat nor is there any impressive fight choreography on display. Instead, audiences are treated to 72 minutes of gun-toting chase scenes and lacklustre fights stringed together by narration offering plenty of philosophical ideology in an attempt to appear smarter than it really is. Overall, Incarnation isn’t entirely a bad film. It shows potential in Filip Kovacevic as a filmmaker. He has a clear eye for design and knows what works well visually. It’s just a shame that Incarnation’s action scenes didn’t carry the same level of impact.