Incarnate Trailer Will Get Inside Your Head

Here be the second trailer for Incarnate, a demonic possession flick from director Brad Peyton (San Andreas, Journey 2), headed our way in December. Check it out below; it more than delivers the goods. 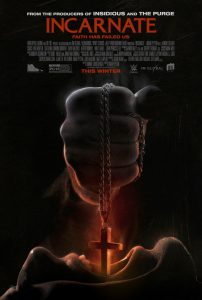 The film comes from Blumhouse Productions and WWE Studios, and stars Aaron Eckhart (The Dark Knight, The Black Dahlia), Carice van Houten (Black Death, Game of Thrones) and David Mazouz (The Darkness, Gotham) as a nine-year-old who is possessed by an ancient demon. Peyton directs from a script by Ronnie Christensen (Passengers, Locked In).

A scientist with the ability to enter the subconscious minds of the possessed must save a young boy from the grips of a demon with powers never seen before, while facing the horrors of his past.