Following appearances at Fantasia Film Festival, Frightfest and Cinepocalypse, Ryan Prows’ bonkers, ultraviolent crime caper Lowlife has been picked up by IFC Midnight, who are planning a release in March. 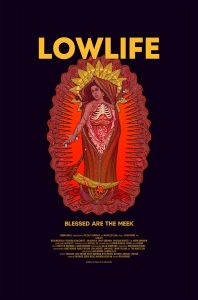 Here’s the quite brilliant synopsis:
When a simple organ-harvesting caper goes awry, a twist of fate unites three of society’s forgotten and ignored: El Monstruo, a disgraced Mexican Wrestler working as hired muscle for the local crime boss; Crystal, a recovering addict desperate enough to arrange a black market kidney transplant to save her husband’s life; and Randy, a two-strike convict fresh out of prison, cursed with a full-face swastika tattoo and a best friend forcing him into a hare-brained kidnapping scheme. As their sordid, small-time lives collide, they must fight tooth and nail to save a pregnant woman from certain and gruesome death.

Take another look at the previously released trailer. It’s brief but brutal and bloody hilarious.