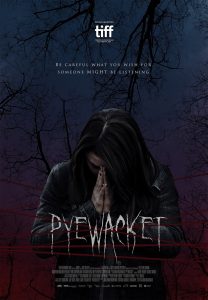 Acclaimed Canadian occult horror Pyewacket will see a US release early next year, having been picked up out of the Toronto International Film Festival by IFC Midnight.

Actor/filmmaker Adam MacDonald wrote and directed the film, which stars Nicole Muñoz (Scarecrow, TV’s Defiance) as Leah, an angst-ridden teenager who heads into the woods, performing a ritual to raise a witch to kill her mother. Things don’t go quite to plan however, and she is wholly unprepared for the sinister entity she awakens.

IFC Midnight will release Pyewacket in selected US cinemas and on VOD in 2018. Check out the terrifying trailer, and be sure to keep your eyes peeled for this one.