If You Go Into The Grizzly Maze Today, You’re Sure Of A New Trailer 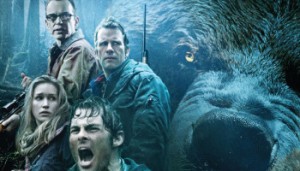 Bears may look like overgrown fluffy teddy bears, but that’s far from the truth and Into The Grizzly Maze portrays just how calculated and vicious the beasts can be. The film is now available on Digital HD and they’ve released a new trailer that might make you reconsider your weekend camping trip.

Into The Grizzly Maze looks like it will really spread the fear of wild animals back into us, and reinstall all those gut feelings you get when you venture near those stunning yet dangerous woods.

Starring in the maze of fur is James Marsden, Thomas Jane, Scott Glenn, Piper Perabo, Michaela McManus and Billy Bob Thornton. The film was directed by the gory mind of Saw V director David Hackl from a script written by Jack Reher.

Keep an eye out for Into The Grizzly Maze in limited theatres from June 26th 2015.