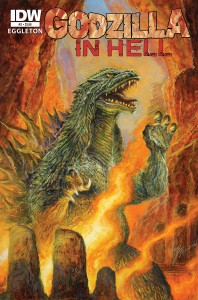 Despite the dead walking the Earth everywhere you look these days, there must be plenty more room in Hell if the King of the Monsters is to find room. Because that’s exactly where Japan’s finest is headed, in IDW Publishing’s new graphic novel Godzilla In Hell.

From IDW’s website:
In Godzilla in Hell, Godzilla will storm through the gates of hell itself, proving that the towering behemoth is King Of The Monsters both above and below!

With no warning and no sign of salvation, Godzilla is plummeted to the deepest, darkest bowels of the infernal kingdom. The mystery of what led to Godzilla’s damnation, and what it will face, will take readers on a dark and twisted journey unlike any Godzilla story before! 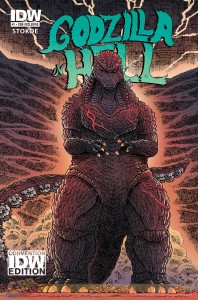 Released as a 5-issue series last year, Godzilla In Hell features the talents of various different writers and artists, each team taking Gojira through a different level of Hell. The first issue features the work of Canadian writer and artist James Stokoe, who created miniseries Godzilla: The Half-century War for IDW. Other writers who worked on the series include multi-award winning Bob Eggleton (Godzilla: Age of Monsters), Ulises Farinas (IDW’s Judge Dredd) and Brandon Seifert (Hellraiser: The Dark Watch).

The 120-page graphic novel will hit comic shops in March.