I Kill Giants Flies to DVD on 2nd July 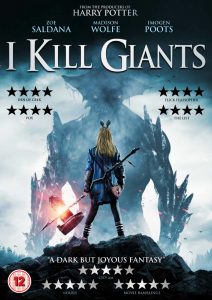 The praised fantasy-drama I Kill Giants is to fly on to DVD on 2nd July courtesy of Kaleidoscope. As per the press release:
I Kill Giants tells the story of Barbara Thorson (Madison Wolfe), a teenage girl who escapes the realities of a troubled school and family life by retreating into a magical realm fighting evil ‘giants’ – colossal monsters who attack her quiet coastal town.

With the help of her new friend Sophia (Sydney Wade) and her school counsellor (Zoe Saldana), Barbara will learn to face her fears – tackling the mean bullies at school, coming to terms with her difficult home life and battling the mythic giants that threaten her world.

I Kill Giants is produced by Chris Columbus (Harry Potter and the Prisoner of Azkaban) and based on the critically acclaimed graphic novel by Image Comics’ Joe Kelly and J.M. Ken Niimura. The coming-of-age fantasy premiered to acclaim at the Toronto International Film Festival (TIFF) last September.