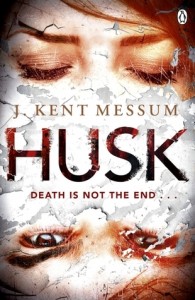 In the future, death doesn’t mean the end for everyone, if you have the readies, your memories and your very essence can remain for as long as you see fit or until your computerized sanity finally flips and initiates a master reset. Mapping of the brain makes copying the human mind a reality that is of course exiting and a touch worrying.

Digitization of the brain is a decision that must be made before flat-lining, only for the extremely wealthy is this choice available. A real time copy can be kept alive via computer support and algorithmic programs. A post-mortem can then upload to a husk through a Ouija, a converter mechanism that allows them limited visitations in the flesh. The dead can live in computer generated realities or beam me up Scotty, over to a lifelike robot via a wireless connection.

A husk is a prostitute, hiring out their body to any client with the necessary means, they have to invest in the operation to install the device that allows another’s conscience to take control of their body, a risky procedure that not everyone survives. A husk is usually a pretty attractive specimen, it’s an illegal enterprise where the dead pick the prettiest and abuse their bodies for a few days. Drugs, sex, the things they crave most and there are no limits nor recollection.

Rhodes is a husk, so is his girlfriend Ryoko, he’s chosen a lucrative career selling his body, not being in control of his body or his actions for days at a time and things start to go askew when he starts to get visions, flashbacks and then a woman he’s never seen before attacks him in a bar. His perfect life is peeling at the edges, he has no idea what his clients do with him and he starts to realise that it might not all be good.

‘My last controlled thought wonders where Winslade will go with my body. I settle down in the recesses of my mind, cocooned by the dark for what seems like ages, unmoving, unthinking. When the dreams finally come they are vivid, like memories playing on a movie screen.’

There’s no overloading on the technological aspect of this vision of the future, enough to explain what’s needed for the plot and it’s full of intrigue. The emphasis is on the characters and that is always a major positive for me. Although there’s holographic TV’s, fancy guns, cures for cancer, Aids and every STI that a well-used prostitute is likely to catch. Yet people still smoke, drink expensive brandy and travel by car, life doesn’t change too much it seems.

Husk is a darkly vivid portrayal of future life, seedy in places, sexually charged, full of power hungry people clinging to an idea of life via a line of program code but things are ever changing, adapting. All told an extremely well written thriller with excellent characterization, plenty of depth and world building that is easily imaginable. Certainly an exciting page turner that you will not want to put down, an intrepid imagination definitely helps and brings a dark mental image of human nature and power that accepts no limits. I really enjoyed Husk and shall definitely seek out his award winning debut novel Bait.