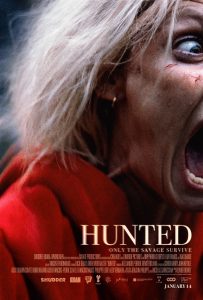 Streaming exclusively on Shudder from January 14th, horror-thriller Hunted has debuted a new trailer and poster that teases a radical new take on the Little Red Riding Hood fable.

The film comes from director Vincent Parannaud, co-director of the Cannes award-winning and Academy-nominated Persepolis, and follows Eve, a woman flung into a life-or-death struggle after becoming the unknowing target of a misogynistic plot against her. Forced to flee as two men pursue her through the forest, she’s pushed to her extremes while fighting to survive in the wilderness—but survival isn’t enough. She will have revenge.

We called Hunted “tense, ferocious, and frequently nasty” in our review out of the Fantasia International Film Festival. See for yourself by watching the new trailer below.