Hungry ghosts have a long and sordid history in Eastern Buddhism. First mentioned in Chinese literature, a hungry ghost is any restless spirit that is driven by an untethered emotional need, much akin to angry Western spirits murdered before their time. In Japanese Buddhism, the concept stays much the same but instead of spirits of vengeance, they become spirits of greed and jealousy, doomed to wander the earth eating corpses. So perhaps it’s only appropriate that world-renowned foodie Anthony Bourdain, having experienced every aspect of the food industry, would appropriately choose the title Hungry Ghosts for his food themed horror comic. Currently on its third issue, Hungry Ghosts is well on its way to becoming one the most unique horror works on the block and, with its newest release, maybe also the weirdest.

The third issue, just like its predecessors, continues on in its short story theme. The overall arc focuses on a dinner party that takes a turn into playing Hyakumonogatari Kaidankai, A Gathering of a Hundred Supernatural Tales, with each guest and worker telling a ghost story until all one hundred candles are extinguished. Seeing as how the comic is a four-issue miniseries, we won’t have to read all one hundred as each issue only has two to three stories. In issue 3, Bourdain takes us further into Japanese folklore with two modernised stories of classic Japanese monsters: the Kappa and a literal hungry ghost. In the first tale, a young cooks apprentice is being horrendously bullied by a senior chef only to learn that there is much more at stake than just his pride and that the chef isn’t nearly what he appears to be. The second story talks about a young man who has returned from working in the big city and brought something very strange back with him: a little mouth that demands to be fed and the only cure will come at the expense of his (and the readers) comfort.

Issue three is definitely the grossest issue in the lot and not from an overwhelming amount of blood and gore (though there is a good deal of that) but from the adaption of the more ‘unsavoury’ parts of Japanese yokai (ghost) folklore. One of the many differences between Eastern and Western folklore is the acceptance and frequent humour behind bodily functions which regularly find their way into stories about ghosts and monsters. Many hungry ghosts are rumoured to not only eat human corpses but all manners of undesirable body waste and the turtle-like Kappa is believed to torment his captives by stealing the soul ball contained in their prisoners’ anus. The latter is included, and illustrated, in the comic and yes, it’s kind of really gross. And the following story is actually worse. But, despite the shock value, the comic keeps this story element because it fits the narrative. Bourdain and his co-writer Joel Rose understand that if they intend to write a true comic about hungry ghosts and Japanese yokai, the more bizarre elements cannot be washed over. Much like the original Grimm’s fairytales, there’s a dark side to every story that reflects closer to the human element than we would like to admit. 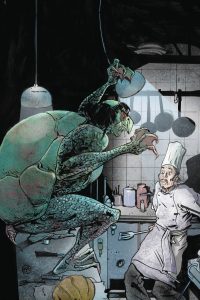 As expected, Bourdain and Co. sets each story in some sort of restaurant or food theme, which is not a surprise considering the authors profession. What is interesting is the correlation between the hungry ghost theme and restaurant work, especially when the reader starts to question his own connection to food, kitchens, servers, and chefs. Is the reader perhaps their own hungry ghost, demanding food, love, or respect from those around them? Are we the victim or are we the monster? The art is handled by a variety of artists, with the first story consistently drawn by Sebastian Cabrol and the second (and sometimes third) handled by a guest illustrator, in the current issue being Paul Pope. Pope’s art fit well with the Japanese aesthetic. He has a wonderfully flowing art style that echoes traditional brush work and helps give the story an authentic feel despite being set in the Midwest. With colours by Jose Villarrubia, the entire work balances perfectly between pop-art and old school Japanese paintings.

If you got a strong stomach and curious mind, definitely pick up Hungry Ghosts #3. Just remember, you have been warned.