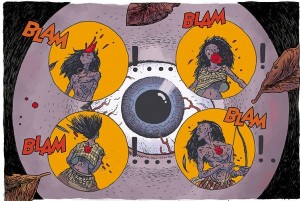 House of Penance, the new six part horror series from Dark Horse, is based on the true story of Sarah Winchester, the widow of a gun magnate who lived in nineteenth century California. The house she builds in issue one – filled with stairwells and corridors that lead nowhere – is a real place, said to be haunted by the ghosts of those who were killed with Winchester rifles. This house is the axis around which all of the action takes place, and we’re treated to many panels of gloomy exteriors and long, ominous hallways. Like the settings of the very best Gothic novels, the house seems to have a personality of its own, imbuing the story with a strange, innominate quality, even when scenes take place elsewhere.

Issue one is a dual narrative, split evenly between Sarah Winchester and Warren Peck, a mysterious outlaw seeking redemption for his sins. Whilst Sarah attempts to finish the house, Peck arrives looking for sanctuary after killing a tribe of Native Americans. Although the two never meet in the first issue, there is an interesting parallel between them concerning children and their inability to protect them. How this fits into the larger narrative is unclear, but with so much about these characters left unsaid, it should be interesting to see how they develop in the coming months, and what relationship they might have when they finally meet.

But it’s the artwork that is the strongest thing about the issue. Bertram’s illustrations, equally detailed and cartoonish, can be placed somewhere between Gustave Dore and The Rugrats. Though the horror in the first issue is somewhat limited, his depictions of Sarah are the most unnerving thing about the book. With her oversized eyes and disturbingly blank expression, Sarah’s presence, cold and austere, has a disquieting effect.

Dark Horse has always been responsible for some of the very best horror comics, and the first issue of House of Penance is no exception. Suitably gothic and unnerving, Bertram and Tomasi create a world which is as unguessable as the eponymous house itself.