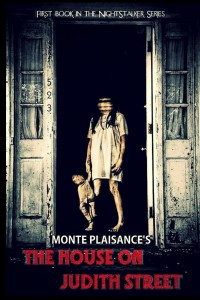 The book begins in 1945 when eight year old Jill unknowingly brings an occult necklace she stole from her father to school. Her nun teacher realizes what it is, and bullies take revenge on her for ruining show and tell. Jill then discovers more of her father’s secrets in the attic. What follows is one of the creepiest and genuinely scary openings to a book that I have read. Don’t want to give anything away, but suffice it to say that as a reviewer I read a lot of horror, and this opening really stuck with me. It is incredibly effective and will definitely creep you out.

We skip forward to 1990. The NightStalker paranormal research team learn of the history of Jill’s house on the titular Judith Street. It has essentially been empty since the gruesome events of 1945. They decide it would be a great place to find their first evidence of paranormal activity. Our NightStalker team – Christine, Joseph, Daniel and Michael – agree to spend the night on Judith Street. As you could guess, that turns out to be a bad idea.

During their overnight stay, we are introduced to various nerve-wracking incidents in a haunted house. Beyond the basic scares and the spirit they discover, there is an even darker and more ominous threat in the house. When the true threat is revealed we get some major scares – again genuinely frightening stuff. This is not just a haunted house narrative. Demons and possession are also involved, and there are some nods to The Exorcist. As the story progresses the tension ratchets up.

Of all the characters, I found Christine the most interesting. Unlike the other paranormal investigators, she has a deep faith and wrestles to resolve the conflict between her religious beliefs and what they are doing. She also uses her knowledge as a resource and tool for the team. I really enjoyed reading about the team’s investigations and the painstaking research as they try to logically put events together using historical records, not Google. They meet an enigmatic and knowledgeable man by the name of Cooper who fills in the rest of the gaps on the investigation and helps them face their fate.

There is a strong argument to support south Louisiana as the best place to set a supernatural story. The area is richly steeped in history, folklore, religion, and superstition, not to mention that it’s where the author is from. There are so many different traditions from the state’s Acadian, Creole, Voodoo, Santeria, and Catholic people, each contributing their own mythos and superstitions. From the Loup Garou to a 20 foot alligator, a Louisiana horror author is spoiled for choice. All these unusual traditions combine to create a place quite unlike anywhere else in the U.S. The author uses this setting, interesting characters, and a genuinely scary story to make this book a must read. This is the first book in a forthcoming series for the NightStalkers and I eagerly look forward to the next installment.