Considering the cruise ship-setting of the upcoming Hotel Transylvania sequel, it only seems suitable that the film sets sail during the summer. Despite the originally planned 21st September 2018 release date, Hotel Transylvania 3 is now going to be unleashed on Friday 13th July 2018. Makes a change for a film to be pushed forward, am I right? 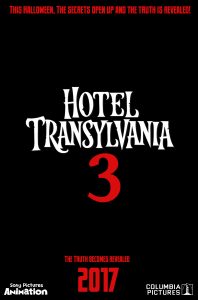 Mavis surprises Dracula with a family voyage on a luxury Monster Cruise Ship so he can take a vacation from providing everyone else’s vacation at the hotel. The rest of Drac’s Pack cannot resist going along and once they leave port, romance zings Drac when he meets the mysterious ship captain Ericka. Now it’s Mavis’ turn to play the overprotective parent, keeping her dad and Ericka apart. Little do they know that his “too good to be true” love interest is actually a descendant of Van Helsing, arch nemesis to Dracula and all monsters!

I haven’t seen the second film, but I had lot of fun with the first Hotel Transylvania when it was released in 2012, so I am definitely planning to catch up with the franchise before the third film strikes.

Adam Sandler, Selena Gomez and Adam Samberg have all confirmed that they will be returning to reprise their roles as Dracula, Mavis and Johnny, so we have an excellent trio to get us started. Genndy Tartakovsky will also be returning to his role as director and writer with Michael McCullers.