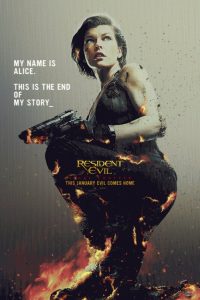 A smoking hot motion poster for Resident Evil: The Final Chapter has been unleashed on Sony Pictures’ Twitter account and it cements the franchise’s closure. Alice’s (Milla Jovovich) story is finally ending as evil comes home this January.

Synopsis:
[Resident Evil: The Final Chapter] finds humanity is on its last legs. Alice must return to Raccoon City, where the Umbrella Corporation is preparing for a final strike against the survivors of the apocalypse.

In a race against time Alice will join forces with old friends, and an unlikely ally, in an action packed battle with undead hordes and new mutant monsters. Between losing her superhuman abilities and Umbrella’s impending attack, this will be Alice’s most difficult adventure as she fights to save humanity, which is on the brink of oblivion.

The story will continue immediately after the events in 2012’s Resident Evil: Retribution which ended on quite the cliffhanger as hordes of the infected swarmed over the walls of the White House. It’s exciting to see the film series come to an end, but we will certainly miss Alice’s ass-kicking.

Resident Evil: The Final Chapter has been written and directed by Paul W. S. Anderson, who has directed all but one of the Resident Evil films, and will be released on 27th January 2017 in the USA and on 24th February in the UK.