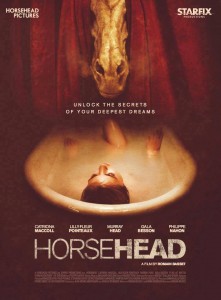 Synopsis:
Plagued by recurring nightmares since childhood, Jessica has begun studying the psychophysiology of dreams in an attempt to understand their meaning. When her Grandmother dies, Jessica returns to the family home in the French countryside, where she receives a muted reception from her icy Mother, Catelyn. After a difficult first night, Jessica becomes feverish and uses her bedridden state to practice lucid dreaming. Family secrets run deep, and Jessica discovers that her Grandmother committed suicide after becoming obsessed with the same horse-headed apparition that frequents her nightmares. Her skills as a lucid dreamer improve and her visions reveal secrets about her past that her Mother has kept from her, all the while leading her to confront the monstrous Horsehead.

French director Romain Basset provides no easy answers in Horsehead, his feature directorial debut. Relying heavily on its arthouse sensibilities, the film uses trippy, often expressionist dream sequences to gradually reveal Jessica’s family history, giving clues to truths never fully confirmed. When Jessica returns to the family home for the first time in three years, she at least gets a warm embrace from her stepfather Jim, but the identity of her biological father has always been kept from her. In a later dream sequence, she sees her pregnant Mother weeping and bloodied, and a truly awful answer is hinted at. While such family secrets are never fully fleshed out however, director Basset does not hold back in revealing his monster, showing the horse-headed terror in all its glory in the film’s opening sequence. Initially glimpsed pushing its nose through crimson drapes the creature, known to Jessica as The Cardinal, casts one hell of an image. Towering over Jessica with lifeless eyes, The Cardinal is clad in priest’s robes and carries a bishop’s crosier in its clawed hand.

The Cardinal is a horrifying figure indeed, and Basset’s film as a whole positively seeps with dread. An oppressive soundtrack drenches the seemingly mundane – a family dinner, a doorframe which is just too black – in crawling terror. Basset familiarizes the viewer with innocuous objects before throwing them into a different context, making a teddy bear or Jessica’s metronome truly nightmarish. What he refuses to do is announce the scares with loud, jumpy leaps in the soundtrack. Early on in the film, a terrifying apparition is glimpsed looming over Jessica, with no aural cue to make the viewer jump. The brief moment is all the more unsettling for its stillness.

Avant-garde has found its way back into horror of late, many festival favourites of the last few years harbouring arthouse leanings. Jonathan Glazer’s Under The Skin received widespread acclaim, and festival awards were showered onto Berberian Sound Studio and Hélène Cattet and Bruno Forzani’s terrifying and beautiful Amer. What these latter two have in common is their unhidden foundations in 60s/70s Italian horror, acting as love letters to directors such as Mario Bava and most tellingly, Dario Argento. Romain Basset is also clearly an Argento fan, the striking visuals and bold swathes of colour that characterize much of the horror master’s work finding their way into the dream worlds of Horsehead. Cavernous church interiors and red drapes provide backdrops to Jessica’s nightmares, while sharply angled lights of blue and red flash over her sleeping face. There is also a recurring underwater scene reminiscent of a sequence in Argento’s Inferno.

While this Argento-esque expressionism dominates the dream worlds of Horsehead, Jessica’s waking reality is defined by a very different visual influence. Though set in France, Horsehead centres on an English family, and the non-descript countryside surrounding them could easily be mistaken for England. It is a sense of British Gothic which characterises Jessica’s reality; centuries-old houses and towering churches, religious imagery absolutely littering the whole film. As we watch Jessica creeping along stone pathways and the passages of her mother’s house it often feels as though we are watching a classic slice of Hammer Horror. Of course the supporting cast of elderly Brits only add to this feeling. The blending of Jessica’s two worlds, and the increasingly blurred line between them, make for a film which exists in a unique reality of its own making. Though set in France, every character, including the family’s doctor, priest and groundskeeper is English, and there are only passing clues which show that they are not in England. Then there is Catelyn, and her uncomfortably stifled manner. It seems at first like a somewhat wooden performance from Catriona MacColl (herself a veteran of Italian horror, having starred in Lucio Fulci’s gore-drenched Gates of Hell trilogy), until we see her more frenzied later scenes. It is as though Catelyn embodies her daughter’s frosty version of her, so that we are seeing her from Jessica’s point of view, further blurring the lines between ‘reality’ and Jessica’s dream world.

What Basset has managed with a meagre $200,000 budget is remarkable. Locations are used to their maximum potential and the FX work fits the mood perfectly. The film arguably gets a little bogged down halfway through as we, along with Jessica, await answers, but the carefully composed atmosphere of creeping dread rarely lets up. Striking images sear themselves into the mind, and will surely come back at the viewer days later. More discerning audiences together with a focus on more visual and stylistic influences are pushing horror in an exciting direction, and Romain Basset is a talent to watch. Look out for a release in 2015.