The Horror of Jenny Finn: An Interview with Troy Nixey 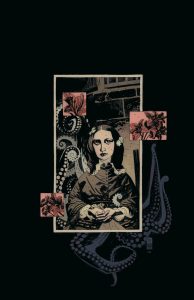 Troy Nixey is your favourite comic artist that you can’t name and there’s a good chance you’ve already read one of his works. Famous among those in the know, this low-flying artist has done work for every major publishing house across the board, even illustrating everyone’s favourite caped crusader, Batman. In 2011, Nixey teamed up with powerhouse Mike Mignola to release an original Mignola-verse work titled Jenny Finn about a girl in Victorian England who is the harbinger of death and disease. Thanks to Dark Horse comics, this once out of print work is back in full blown colour, bringing more fish monsters and old gothic glory that you can shake a stick at. Troy Nixey recently sat with Scream and talked to us about his involvement with all things creepy and crawly.

Scream: How did you get involved with Mignola and Jenny Finn?

Troy Nixey: From the first time I saw Mike’s work he was an inspiration to me. When I found out he appreciated my work I boldly threw out the idea of working together. ​You could have knocked me over with a feather when I heard Mike was open to the idea. We began chatting about what we wanted to do, I started sending him drawings and Jenny took shape from there.

Were you involved with the story at all or were you simply presented with a script and instructions to draw?

I didn’t get a co-writer credit for nothing, hahaha. Mike is very collaborative and many discussions were had. After we dialled in what we wanted to do, Mike would send a plot, I’d draw it, adding some dialogue suggestions in the gutters and Mike would write the script after seeing the pencils, sometimes using my dialogue notes, sometimes not. It was a very organic experience. I love working with Mike, he’s a best idea wins, creator. 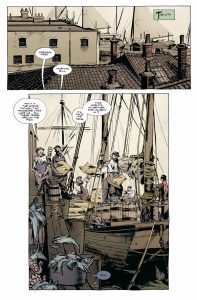 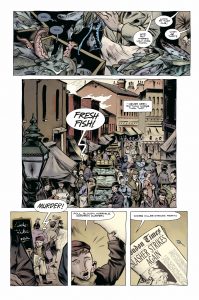 Did you find it difficult to work with another creator who also illustrates comics? In other words, did you feel like there was pressure on you to meet Mignola’s illustration expectations?

None. Mike is wonderfully supportive of other artists and at no time did I feel pressure from him or the publisher to try and be anything but what I was. ​

How do you feel about Jenny Finn being reissued after 6 years? Looking back on it with new colors and a stylish hardcover, is there anything you wish you did differently?

I’m thrilled. I actually brought the idea to Dark Horse after it went out of print. The book was always intended to be in colour so I’m over the moon, with what Dave Stewart is doing, he’s the best. I do regret that I wasn’t able to complete the entire series. Farel Dalrymple stepped in and saved my bacon, I’m thankful for that. One day I’ll get into the why I wasn’t able to but for now I’m happy seeing Jenny Finn in glorious Dave Stewart colour. ​

This is not your first work with Mignola. You have also worked on Batman: The Doom that Came to Gotham. Tell us about that!

Another wonderful experience. I’m not much of a superhero guy but Batman has always intrigued me. I believe it was Mike who suggested me for the job, of course I jumped all over it. ​It was the first and last time I didn’t ink myself, that took some getting used to. 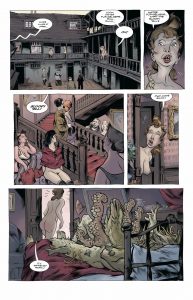 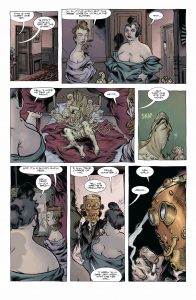 You have worked on comics for years, with most having a dark bent to it. Is that why you and Mignola seem to have a good energy together, that you both are attracted to the stranger side of life?

We definitely both have a healthy appreciation for monsters and antiquated trappings. Hahaha. ​

Your style tends to harken back to old-school horror art right at that 1960’s intersection where horror artists started to experiment with illustration and comic work. Am I right to assume you were influenced by that era? How did you develop your style? 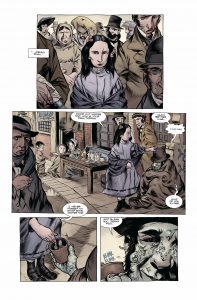 Not really. I wasn’t exposed to that work during my formative years. It’s hard to pinpoint who my biggest influence is. I grew up watching a lot of Looney Tunes cartoons, reading Mad Magazine. Comics came a little later to me. It was Diana Schutz who pointed out the obvious Dr. Seuss influence. It was super obvious after she said it. My work progresses like most artists who push themselves but strive to have fun while working.

Can you tell us about anything new coming out? Perhaps more work with Mignola or maybe an original comic?

There’s a lot on deck. Along with Jenny Finn, Dark Horse is reprinting It’s Only The End Of The World Again as a beautiful hardcover. Starting in January, I have a brand new four issue mini-series coming out called Vinegar Teeth. It’s a really fun, madcap book that Damon Gentry and I collaborated on. Finally I’m about to jump into a brand new Trout, four issue-mini series, I’m writing and drawing that one myself.