Horror Game Kholet to get X-Box One Release 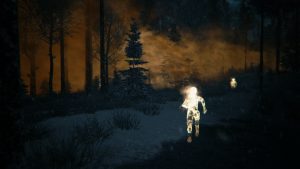 The horror exploration game Kholet has been making waves ever since it the game market two years ago. While the game did see a release on PS4 and PC when it first emerged in 2015, there was never a proper port to the X-Box One, until now. Coming in June 9th, X-Box fans can finally enjoy the bizarre little title as well, something that fans argue should’ve happened a long time ago.

For new players, Kholet is a first person survival horror where the player wanders the Ural Mountains of Russia trying to solve the real life mystery of the missing hikers that disappeared in 1959. Popularly known as the Dyaltov Pass Mystery, legend has it that nine ski hikers went into the mountains and never returned. When the Russian military went looking, they found the campsite in a shredded mess and the bodies of five hikers were found further down, stripped to their underwear and covered in fatal injuries, despite not having any external wounds. Four more bodies were found two months later under four feet of snow and wearing the clothes of some of their friends. To this day, no one knows what drove these nine hikers to abandon their tents and what had finally killed them out in the mountains of Russia.

The game Kholet (named after the mountain the bodies were on) creates a fictional account of the incident and allows the player to explore the mountain, sans map, and solve the mystery through notes and pages that the hikers left behind. As you explore, an unseen force follows you around the mountain and tries to stop you from looking any further, cumulating in bizarre visions and outright attacks. Since there is no map, the player is forced to use landmarks and their compass and, hopefully, a damn good memory. Also, the whole thing is narrated by Sean Bean, so that’s pretty sweet.

Lukasz Kubiak, Kholet’s narrative co-author, goes on to say:
“We never thought that Kholat would become so popular. Thanks to the amazing feedback we have received from players around the world, today we are proud to announce the game’s upcoming launch on Xbox One. At the same time we’re aware that our fans have many questions and that there are many theories and assumptions concerning the events we have presented in our story. All I can say right now is that, looking at how big our community has become, answers to those questions may emerge in the future.”

Tantalising! If you’re interested in snatching a copy, pre-orders will be available on June 2 and the game will be officially released on June 9th from IMGN.PRO. Though there is no word on special features added to the release, Kholet will still feature its atmospheric soundtrack, a large open world to explore, and additional side missions that made the game so popular.