Horror Channel FrightFest Glasgow is looking as promising as ever this year and one particular event that has us at SCREAM more than intrigued is a sneaky peek preview of Dominic Brunt’s latest feature, ADULT BABIES.

Unable to hold our breath until the festival itself to discover what Brunt has in store, we jumped at the chance to catch up with the film’s creator, actress/producer Joanne Mitchell (star of Before Dawn and Bait) to find out just how much the couple’s latest movie will soon be rattling audiences. 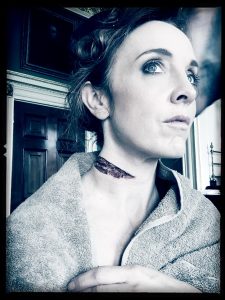 SCREAM: With the film very much under wraps and with very little information available online, can you give us a bit of a spoiler-free outline of what we can expect from Adult Babies? It’s been described as a VERY British satire but we need more details please…

Joanne Mitchell: It is a satire and it’s like nothing Dominic has ever done before. Obviously, we’re not giving too much away because we don’t want it to be old before its time but I can tell you it’s about a group of high-powered, middle-aged white men and they go to this place to take refuge from the stresses of their daily lives and spend time relaxing and regressing as “adult babies.” It’s set in a beautiful, secret location but this is not their only function. As adult babies, they are there to refuel the world’s economy by sinister and unusual means. It’s completely bonkers (laughs) and hopefully people enjoy it.

SCREAM: You came up with the storyline for Adult Babies with Dominic before taking it to the scriptwriter, who in this case was Paul Shrimpton. What was your criteria for selecting the scribe and how hands-on are you during the screenwriting process?

JM: Obviously, Paul wrote Inbred so he knows his horror genre and we thought that our script fitted his particular genre style. Dominic had worked with him on Inbred so we asked him if he’d have a read of our synopsis and the guideline. He read it, really liked it and came back saying he’d love to write the screenplay.

In terms of the screenwriting process, Dominic and myself are quite detailed in what we want and where the story is going. Obviously, as is the case with any screenwriter, we gave him the scene-by-scene synopsis and then Paul came back and we would re-edit it and go back to the original because that’s just the process. But you’ve got to let the writer go off and do their own thing and use their own imagination and bring up their own ideas as well. So we had various drafts and it was very much a backwards and forwards process until we felt we’d nailed it to what we were happy with.

SCREAM: And where did the idea for the film come from exactly? I think the idea for Before Dawn was the result of an argument you had with Dominic and then Bait was a very socially relevant film. Will Adult Babies be as socially relevant and allegorical as the latter given the fact it deals with the economy and high-powered professionals?

JM: Absolutely. I do think it is allegorical because there is this kind of social statement running alongside it on the world in which we live in and the people who rule it. I think it was actually when we were filming Bait that Dominic came up with this idea for Adult Babies. We were just sort of laughing about it on set but we agreed that it could actually be a good idea so we shelved it just because we had to get on with the filming and the post-production of Bait. Then we just kept on talking about the idea and in the light of everything that’s been happening in the world, it just felt appropriate to put pen to paper and write it. 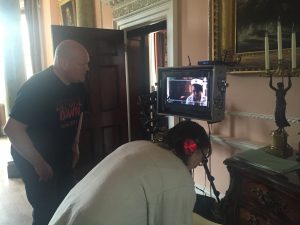 SCREAM: Would you say you tapped into anything personal or and your own lives when concocting the premise for the film?

JM: Erm, I wouldn’t like to say because you’d need to see the film really. I hope people don’t think it’s a reflection on me and our lives (laughs). We certainly aren’t adult babies, that’s for sure – not that there’s anything wrong with being an adult baby. (laughs) But, to answer your question, we definitely tried to mix the genre and the social statement for this one.

SCREAM: Your previous film, Bait, did feature some dark comedy but the “brunt” of the film was very dark and savage. Adult Babies is described as a very satirical film so I wanted to ask you whether you feel more at home writing straight-up horror or finding the perfect balance between horror and comedy?

JM: It’s a good question and I would say this was much more challenging for me. It was so much fun in the sense that we kept asking ourselves just how far we could take things. It’s hard to say which I prefer but this took me out of my comfort zone in terms of how far we could take it. I have to say that most of the gore elements were the result of Dominic and Paul having lots of fun together coming up with possible scenarios. Adult Babies is definitely less formulaic than Bait or Before Dawn and it is what it is really. It’s a difficult one to describe.

SCREAM: So would I be right in guessing you’re pushing even more boundaries this time than you have done thus far?

JM: I don’t really think we push boundaries in the film world at all compared to what other people do. For us, we just believe in trying to do something different in each film and we try to find unique ways to tell our stories. If you look at our previous films, you’ll see how we used zombies to tell the tale of the end of a relationship in Before Dawn or how we used humans in Bait as definite genre monsters within a drama tradition. Hopefully we’ve done justice to the wider stories within Adult Babies because it’s a new monster and it’s within the genre. It could easily be vampires, werewolves or witches but I suppose we asked ourselves, “As the world gets madder and more twisted and extreme, do we as humans get just as twisted?” And I guess the answer is yes to a certain extent and what we do in Adult Babies is tell the political story without preaching or getting boring about it. And because we love genre so much we wanted to tell this political story inside a genre story. 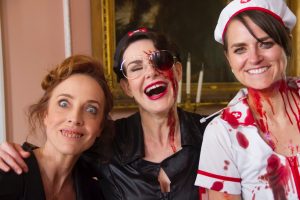 SCREAM: Aside from Adult Babies you have all kinds of things on the go as a director and actress too. Can you tell us about any of those projects?

JM: I have a short film planned as part of a fear anthology. We’re hoping to get that off the ground. It’s a film called “Sybil” which I wrote with someone else and the plan is for me to direct that. There are four other directors involved so it would be amazing if we could sort that out.

There’s Simeon Halligan’s Habit too. That should be out soon so watch this space. That’s all set in Manchester and it’s a really interesting, dark, seedy film about the underworld of Manchester and where the addicted people go to prey on the lonely souls of Manchester. And it’s got some great cast in it like Jessica Barden and people like that so I think it’ll do very well.

SCREAM: Brilliant. So just to leave FrightFesters foaming at the mouth, what can the audience expect at the Dominic Brunt-hosted Adult Babies sneak preview event in Glasgow?

JM: Well Dominic’s going to be attending but I sadly can’t make it. Dominic will be introducing a teaser for the film, as we still haven’t quite finished post-production just yet, and he’ll be on hand to talk all about the film.

We’d like to thank Joanne for taking out some time to chat with Scream and you can find out all details of the FrightFest Glasgow lineup and events at the official website.