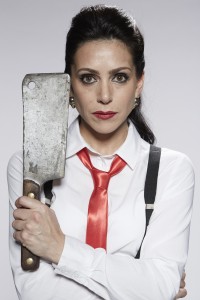 Being an Ambassador of the Horror Channel it is my role to keep you up to date with all your Horror needs via the little black box in the corner of your room. With the increasingly popular medium of live and interactive entertainment in the horror industry I thought I’d throw some news your way of a very different kind of horror viewing this month! The Horror musical is of course not a new concept (Rocky Horror Picture Show, Little Shop of Horrors, even Evil Dead the musical!) but I never thought I’d see the day Troma creation Toxie would tread the boards in London in his very own theatre production, but then, you should never underestimate Troma King Pin Lloyd Kauffman! Yes The Toxic Avenger is now a rock‘n’roll musical described as a toxic love story with an environmental twist. If you guys fancy something different for your horror fix get down to the Southwark Playhouse in London, the show runs till May 21st 2016.

Of course if that’s too much effort, stay where you are while I tickle your pickle with my movie premieres on offer this month, only on Horror Channel.

STITCHES   Network premiere   Saturday 7th May   10.50pm
My top pick in May is horror comedy Stitches (2012). Pulling the sickest tricks out of the hat this British film stars standup comedian Ross Noble as the eponymous Stitches, a lewd, crude cursing clown who scrapes a living as a children’s party entertainer. During a particularly bad gig a group of annoying kids play a prank on poor old Stitches which ends very badly putting the clown 6 feet under. Stitches, however, will get the last laugh when he returns years later to torment and kill the group of kids responsible! Expect some of the most inventive death scenes ever, such as a head being blown up like a balloon till it pops, and the rabbit in a hat trick gets a head spinning twist!

THE CHILDREN  Network premiere  Saturday 28th May   9.00pm
No comedy at all in my next pick, as WΔZ director Tom Shankland explores a dark and somewhat taboo theme in horror; evil children. Two families come together for Christmas break in an idyllic snowy setting, but by the evening the children fall sick, their behaviour rapidly degenerating into that of feral violent emotionless creatures. The parents become victims of the children they so lovingly brought into the world and nurtured. It’s actually hard to sum up in writing why this is truly horrific, but the thought of all that pure innocent unconditional love and trust, suddenly meaning nothing; for your own child to not only hate you but want to kill you, makes my skin crawl!

THE FACILITY    UK TV Premiere  Friday 27th  10.55pm
I’m sure there will be the odd person reading this who can relate to our victims in my next movie premiere! Cash strapped and not too precious, the thought of handing over your veins to medical science in return for £2000 is certainly tempting (I did a bit when I was a student!) and forms the set up for the UK TV premiere of The Facility. Seven unfortunate strangers agree to give up two weeks of their life to stay in a remote hospital ward to try new drug Pro9. Things soon turn nasty however when the patients vomit blood, convulse and begin attacking each other. All they can do is wait for the drug to take hold and succumb to the psychosis….

CURSE OF THE CRIMSON ALTER    Network premiere  Saturday 21st  10.50pm
If it’s vintage horror you like, look no further than this1968 classic. A film that brings together three of the greatest icons in horror: Boris Karloff, Christopher Lee and scream queen original Barbara Steele. A young man goes searching for his missing brother but instead finds an old manor house, an alluring aristocrat and an obsession with the black witch of Greymarsh – who was burned at the stake but seems very much alive today….

This was Boris Karloff’s last completed film in a career spanning 206 films – recognised as one of horror cinemas greatest icons – to watch this is to watch horror history itself! And Barbara Steele is a sight to behold as the green skinned witch Lavinia surrounded by blokes in leather pants and goat masks – nice.

THE VATICAN TAPES     UK TV Premiere  Friday 13th  9.00pm
With the slew of possession movies over recent years making box office hits (The Devil Inside, The Possession, An American Haunting, The Last Exorcism) it’s no surprise to see this sub-genre still going strong. Here we have a beautiful young woman possessed by not just an everyday demon, oh no – it’s the devil himself and the Catholic Church have got one big fight on their hands!

TERROR       Network premiere   Saturday 14th 11.00pm
Back to 1978 now and a very posh aristocratic family are being bumped off in increasingly grizzly ways! It transpires that the family are descendants of witch hunters who, 300 years ago burnt a famous and powerful witch at the stake, but not before she delivered a final blow of black magic to curse their family forever more…. Directed by cult British director Norman J Warren this is a must for lovers of ‘under the radar’ British horror.

HAUNT  UK TV Premiere   Friday 20th   9.00pm
For those of you interested in EVP (Electronic voice projection – phenomenon) you’ll love this UK TV premiere high on atmosphere, characters and old fashioned spooks! A lonely teenage boy and his family move in to the Morello house unaware of its troubled history. Previously a whole family perished there, except the mother….. He befriends a mysterious girl who seems to know a lot about the house and takes him to the attic where hides a strange old radio that’s able to tune in to the voices of the dead….

MANEATER    UK TV Premiere   Friday 6th May  9.00pm
Eco horror meets creature feature in this fun UK TV premiere starring Sherilyn Fenn. On the pretence of researching climate change a biotech lab have been genetically cross breeding animals, and of course one of them has broken free. Set in snowy Alaska the pure white desolate environment helps set the chilly feel to the film while the presence of two glamour models on a photo shoot certainly heat things up! The natives believe a giant 20 foot tall bear is the result of a vengeful spirit, but the truth is far darker…..

So that’s all fiends! Till next time…..