The sunny alt-indie tune that tense Mexican psychodrama Honeymoon (original title: Luna de Miel) opens to sets a kooky, almost cutesy indie flick feel that is upheld for the few scenes that follow, before we are dragged into something altogether more troubling. It is partially a ruse, but one that does set the tone for a film that in certain ways, plays out like a twisted violation of an indie rom-com. 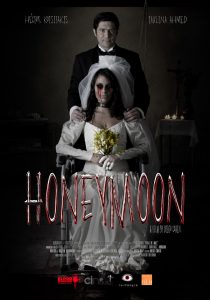 The opening scenes introduce us to smartly-dressed loner Jorge and the object of his affection, Isabel, whom he repeatedly tries (and fails) to speak to, in a series of brief encounters which are tragically comic and kind of sweet. Things get a little more cringey and pathetic when Jorge takes up jogging in an attempt to engage Isabel on her daily morning run, later trying to impress with the donning of a bowtie. The real obstacle for Jorge is not his apparent shyness or Isabel’s busy lifestyle however, but her happy marriage to Pablo, who looks less than pleased when he catches Jorge staring at his wife. Jorge swiftly takes matters into his own hands however, drugging and kidnapping Isabel, whom he ties to a chair in his basement before performing a marriage ceremony for the two of them. Jorge is determined their marriage will be a happy one, even if that means a little discipline to keep Isabel in line.

The kidnap/torture setup makes for a well-trodden plot that we’ve seen countless times in countless gruelling horror flicks, but seldom in films so meticulously crafted as this one. Every aspect of the film feels tirelessly planned out, from the sparse but always meaningful dialogue to the flawlessly composed shots, which are never cluttered with any unnecessary distractions. The well-planned, clinical approach taken by director Diego Cohen is matched at every turn by Jorge, whose surgical tools and array of syringe-administered medicinal drugs hint heavily toward him being a doctor, although he never explicitly reveals this. Honeymoon’s aesthetic is governed by a distinct lack of colour, which initially expresses the mundanity of Jorge’s existence. The opening scenes see him taking the bins out or fixing the shower head, all in a near-monochrome world, albeit one with tiny but significant splashes of red that tell us what to expect later on. The humdrum events depicted in the early scenes also make Jorge’s bundling of Isabel into his car boot – though brief and calmly downplayed – extraordinarily powerful.

The cleverly crafted visual world of Honeymoon is complemented by the film’s soundtrack, which is used to staggeringly strong effect. The sly use of that opening indie tune is not the only trick played by the score, which is predominantly made up of ominous pulses and tones, but occasionally breaks into cacophonies of ugly sounds and oppressive builds. There are a few beautifully realised moments that merge the visual and aural aspects of the film, as diagetic sounds – Isabel’s scream, a whistling kettle – blend into and become part of the music, making the horror all the more encompassing. Then there are the occasional melodramatic fanfares that would sit comfortably within Hammer’s more lurid output, and accompany the few overtly gothic images that Honeymoon is interspersed with. These shots (which include silhouetted trees against a full moon in a purple sky) act as sort of chapter headings, while also anchoring the film to its genre as it plays with less conventional horror tropes elsewhere. Such images are startling in their abruptness and positioning, as well as their comfortable familiarity.

Hector Kotsifakis plays Jorge as a man blandly contented on the outside, but hiding a quiet, unfulfilled longing. The fact that he is not prone to extremes of emotion or boggle-eyed craziness means that, despite having been kidnapped and bound, Isabel does not seem to be in a huge amount of danger at first. Quickly though, it is Jorge’s apparent calm that makes him so dangerously unpredictable. It’s a strong, memorable performance but one that cannot outshine Paulina Ahmed who, as Isabel, is remarkably assured in what is her first onscreen role. Her conviction and commitment to the story’s grim realism mean that as she traverses the familiar narrative construct of the captive faking sympathy for their captor (responding with smiles and soon, kisses) we believe her but crucially, we believe that Jorge believes her. 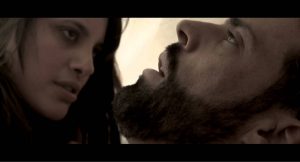 Honeymoon breathes fresh life into a fairly bare-bones kidnap tale, with consistently impressive stylistic touches but also, despite few comedic beats, a strangely comfortable indie comedy feel that works even through the dark material. When Isabel, bound and imprisoned, reveals her abandoned dream of being a runner, we even get a message more akin to a light rom-com or Disney teen musical; follow your passions, because you never know what will happen. It’s just that Honeymoon  finds a particularly vicious way to hammer home this thought. Honeymoon ends on an epilogue of sorts that doesn’t quite come off, and wont occupy your brain as long as anything from the previous 90 minutes. It’s a minor misstep however, and not one that can detract from the originality, beauty and stark realism that this incredibly taught and involving gem so expertly builds.