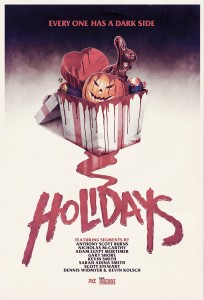 Synopsis:
Holidays is an anthology feature film that puts a uniquely dark and original spin on some of the most iconic and beloved holidays of all time by challenging our folklore, traditions and assumptions.

Horror anthologies and holidays are forever united of late, what with last year’s hits, A Christmas Horror Story and Tales of Halloween. With their strategy of intertwining segments revolving around one particular time of the year working so well, I was sceptical but intrigued when it came to the latest horror anthology on the block, Holidays, a film rooted in a concept devised over a decade ago by producer, John Hegeman with nine directors shooting eight different shorts, all of which are loosely related to very different times of the year.

The good news is that Holidays has plenty more going for it than I anticipated and, pondering on a comment Hegeman made recently when talking about his inspiration behind the concept, it makes complete sense as virtually any celebration does actually bear all the trappings of a perfect horror movie: “Holidays in general are always a balance of anticipation and dread. I love how the day can really freak people out and things can just spiral into complete chaos.” And therein lies the film’s secret ingredient: all of us can relate to Holidays as we’ve all got our own fair share of terrifying tales of celebrations past.

Another factor playing very much in the film’s favour is the fact that, regardless of when you watch it, one of the eight different holidays represented is always going to be right around the corner, meaning unlimited excuses for whipping it out for another watch. The nine directors were given a seriously long retractable leash too, in terms of how holiday-specific their shorts had to be, so it really is suited and booted for any given moment of the year. Don’t get me wrong, though! I’m not suggesting in the slightest that you should refrain from watching the likes of Tales of Halloween any time other than the witching hour.

But how well do the shorts themselves actually bode?

Whenever reviewing anthologies, breaking them down into each of their separate parts feels to me like I’m sapping out what is essentially the real fun of these films; that element of surprise; of not knowing where the next segment is going to hit you. Accordingly, here’s a look at a few of the highs and lows with, thankfully, less of the latter.

The only real gripe I had with Holidays is that it took a while to get going, although I’m inclined to think that the earlier segments will probably grow on me with repeated viewings; just as the film grew on me as it continued. For the better part of the first half of the movie, with the likes of Kevin Kolsch’s and Dennis Widmyer’s “Valentine’s Day” and Sarah Adina Smith’s “Mother’s Day,” the shorts were certainly entertaining but I think the film would have benefited from a slightly harder-hitting opening segment. “Valentine’s Day” was almost like a little sister to Starry Eyes, a film I love, but here I felt things stuck a little too close to a well-trodden path and the climax wasn’t as much of a surprise and maybe it could have been. But fear not, as Kolsch and Widmyer more than make up for this in the final segment, but more on that later. “Mother’s Day” also started out with a really unique and intriguing premise, only to fall a bit flat in the final reel, although I must mention here that a reveal in the trailer is essentially the culprit for this anticlimactic moment.

Slow starts aside, an absolutely superb ensemble cast keeps the whole thing bubbling along. Whilst it’s always a blast pointing at a plethora of familiar faces as they pop up, Holidays is so much more than that. Particular praise to Ruth Bradley and her maternal pangs (“Saint Patrick’s Day”), a guilt-ridden Seth Green (“Christmas”) and a digital dating Lorenza Izzo (“New Year’s Eve”), all of whom clearly had the time of their lives filming this, and when that transcends the screen it’s always so much more rewarding for audiences.

But hands down the best performance arrives in Anthony Scott Burns’ “Father’s Day” in the form of Jocelin Donahue who puts in a mind-blowingly dramatic and emotional turn after receiving a cassette from her long-lost father giving her directions on how to find both him and the answers to her long-gestating questions. Amidst a lot of the more off-the-wall tales, “Father’s Day” really jumped out from the crowd and made for one of the stronger segments. (Question for Scott Burns: Was it a casual coincidence Donahue donned a pair of those classic orange foam headphones for this one?)

Talking of off-the-wall tales, mentions must be made of Kevin Smith’s Halloween segment, “Hollow Ian,” and Scott Stewart’s “Christmas” as these two crammed in by far the largest doses of cuckoo comedy, as was pretty much to be expected from Smith but, coming from Stewart was a big, but pleasant surprise. More off-the-wallness is also to be found in Nicholas McCarthy’s “Easter” segment which provided a fun, yet at the same time deeply metaphorical and philosophical mother-daughter tête à tête regarding the meaning of Easter before some ear-raising practical effects hop into the frame.

As I said, the segments kept upping the ante as the movie went on and Holidays definitely saves the best dance till last with Adam Egypt Mortimer’s “New Year’s Eve” (written by Kevin Kolsch and Dennis Widmyer). Again, I don’t want to spoil the fun, but this action-oriented romantic blind date will put you off online dating forever.

On the whole, Holidays might take a little getting used to – at least it did for me – but it’s still a pretty solid new addition to the new wave of new wave of anthologies hitting festivals and theatres and I’d definitely be up for another outing to see what a myriad of other directors can muster up from their favourite times of the year. Pacesetters like the aforementioned Tales of Halloween or A Christmas Horror Story were always going to be hard to keep up with but most of Holidays’ festivities are worth celebrating and Egypt Mortimer puts in a really solid final sprint to ensure the audience leaves on a maximum high.