Mark Alan Miller and Clive Barker bring us Hellraiser: The Toll, which serves as a prologue to The Scarlet Gospels. Where the scale of The Scarlet Gospels was huge and apocalyptic, with all out war involving Pinhead, this is more of a personal journey. Kirsty Cotton, the heroine from the original story, returns. She is the one who faced Pinhead and the Cenobites and lived. It’s been thirty years since those events and Kirsty lives on the run. She’s been unable to escape the events of the past and in this story, they finally catch up with her.

I love to read anything that expands on the Hellraiser mythos and this does just that. Not only do we learn more of Kirsty’s story but also more about the puzzle box maker, Lemarchand. There are unsettling moments throughout, but the story is restrained. It relies on the claustrophobic atmosphere and pervasive dread that surrounds Kirsty, rather than overt violence. 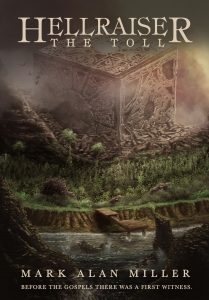 There are many references to the original story and characters, including Frank and Julia. As a Hellraiser fan, it’s a delight to read those references. Kirsty is a character that was so integral to the original. It’s rewarding to see her role expanded.

There are superb Clive Barker sketches throughout that enhance the book. I would have liked to have read this as a teaser to the Scarlet Gospels. The story does not disappoint and I’d be delighted to read more Hellraiser stories from Mark Alan Miller. Maybe he will take on the Hellraiser mantle from Clive Barker.