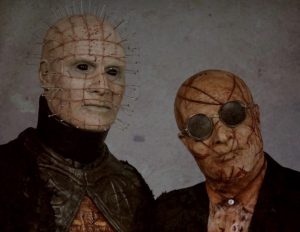 We’ve heard a lot about Gary J. Tunnicliffe’s Hellraiser: Judgment over the past year or two, but one thing that has remained entirely elusive is news of a release date. Well, that changes now, with a Lionsgate Blu-ray available for pre-order from Amazon, with a release set for February 13th, 2018.

The tenth instalment in the once-great franchise, Judgement is also the second not to feature Doug Bradley in the iconic role of Pinhead, whose leathers and chains are donned by Sin City’s Paul T. Taylor. Tunnicliffe took the directorial reins having worked in the effects department on the series since 1992’s Hellraiser II: Hell on Earth.

Synopsis:
Detectives Sean and David Carter are on the case to find a gruesome serial killer terrorizing the city. Joining forces with Detective Christine Egerton, they dig deeper into a spiraling maze of horror that may not be of this world. Could the Judgment awaiting the killer’s victims also be waiting for Sean?