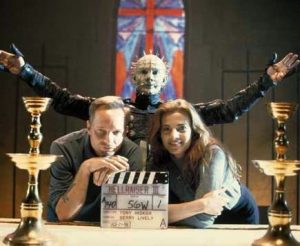 Anthony Hickox, who directed Hellraiser III: Hell on Earth, as well as 1988’s Waxwork and its sequel, and 1993’s Warlock: The Armageddon, is returning to the genre with his latest, sci-fi chiller The Shrine. While production is not due to begin until early 2018, the film is already being shopped around at the Cannes market, by UK sales outfit Carnaby International.

The Shrine is set “…against the backdrop of war in the Middle East. When a US drone strikes a rebel convoy, a blackout engulfs the Syrian-Turkish border. The US and Turkish military team up to investigate, stumbling upon a shrine at a mosque in a deserted town. What they find buried beneath will test the soldiers’ faith.”

Sebastian Pearson, who is producing under his Pearson Films banner, said of the film: “Our original idea was to take a high concept, action sci-fi idea and set it in a Mosque amongst the Syrian conflict to highlight the craziness of all religious prejudices, much like Get Out used classic horror to highlight racism in the U.S.”