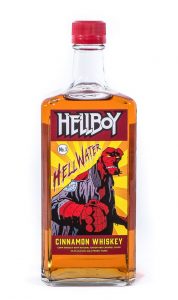 In other words, it’ll taste just a good going down as it does when you throw it up later that night from playing the “Drink Everytime Hellboy Punches a Nazi” game. Also, if you’re a big fan of both comics and booze, snatch these up quick, as Hellboy is currently the only comic character to have gotten an official liquor tie in and at $20 a bottle, it’ll be gone fast.

Pick up your bottle at specialty stores or order directly from the distillery at: hellboyhellwater.com