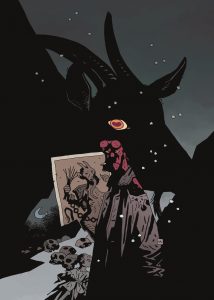 Though Hellboy maybe most popular for punching Nazi’s and Russian wizards, he has, in fact, punched many other things. Skeletons, demons, ghosts, Baba-yaga’s, mermaids, chimps swinging guns, the list goes on and on! But have you ever found yourself asking: when is he going to punch an evil personification of a beloved Christmas folk hero? Well ask no more, my oddly-specific friend, for Hellboy has finally landed a punch right on Christmas’s bloated, eggnog nose! Hellboy: Krampusnaught, roughly translated to Krampus Night, follows our beloved demonic lead as he walks into the house of Krampus himself only to be forced to fight the beast lest he be killed himself. A fun, folklore addition to the already momentous Hellboy mythos, this one-shot will surely become a family classic for years to come!

As stated, Hellboy, doing what Hellboy does, is seen walking the world in search of solidarity when he is spotted in the snow-bitten Austrian woods in 1975. Accosted by the spirit of a woman, she pleads for Hellboy to save her son and leads him to a cottage owned by a kindly man named Mr. Wilhelm Schulze. Despite appearances, Hellboy quickly realises that Schulze is the very monster he was sent to find by a priest in the neighbouring village, the monster named Krampus, and Krampus was expecting him as well. It seems, after centuries of living on Earth, Krampus was tired of the human world and needed Hellboy to kill him. Will Hellboy be able to send him back to Hell and free the spirits of the dead or will he too become a skeleton in his walls?

If you’ve heard the name Krampus thrown around the past few Christmas’s, well you’re not alone. Just like zombies and vampire before him, Krampus (the goat-headed “Christmas Devil”) has become the new ‘it’ creature of horror, having gone from a Bavarian children’s folktale to the star of several movies, live action and cartoon appearances, comics, video games, and the headliner of several Krampusfests. So what exactly does the Hellboy Krampus have to offer that hasn’t been done a million times over? Well, for one, it’s heavily steeped in the Krampus folklore of Austria. Many of Hellboy’s stories that deal with local legends will attempt to stay as true to the original source as possible and this work is no exception. Unlike the more recent revivals where Krampus winds up in some Midwestern town in America beating down the door of an X-Box addicted brat, the comic has him throwing down with the monster on his home turf, giving the work an extra layer of authenticity. Of course, he also maintains his body chains and devilish appearance to symbolise the binding of the Devil by the church, something that Hellboy might have more in common with than he thinks.

Another interesting difference is that it doesn’t simply stay within the Krampus folklore but explores other smaller traditions of Bavarian Christmas. We see Krampus invite Hellboy for dinner, a nod to the Feast of St. Nicholas celebrated on December 6th, and share a drink of Schnapps, a drink traditionally left out for Krampus to calm his temper. We even learn about the yule goat and a smidge about Germanic paganism. Think of this work as a quick lesson in the history of European Christmas with a hefty amount of punches!

The comic itself is, once again, handled by Mike Mignola. If you’ve read any Mignola works, than you know that this review will mention how wonderfully paced the writing is, that the action is perfectly timed and how much it harkens back to older Hellboy adventures making it the perfect Hellboy one-shot. The man has had more praised heaped on to him than a first time mother and luckily, his artist knew that he needed to step up his game. The art by industry giant Adam Hughes is undeniably gorgeous and he brings his years of comic illustration talent to the forefront of the comic. Krampusnaught is beautifully drawn in a way that is both a nod to the original Hellboy art with its heavy shadows and block coloring but still wholly unique to Hughes style of fine detail and creative angles. Frankly, it’s a match made in Heaven. If all Hellboy comics could forever be drawn by Adam Hughes, we would never need another artist for the rest of Hellboys career.

If you’re interested in picking up this very unique Christmas special, the work is on shelves now!