Hell is Above us in this Poster for Ascent to Hell

If you thought Hell was below and Heaven was above, then this poster for Ascent to Hell tells you that you are wrong. Check out the gritty poster below which shows an inquisitive woman ascending the stairs – to hell, probably – while an ominous looking figure looms in the background. Is anyone else getting a Candyman vibe from the look of it? 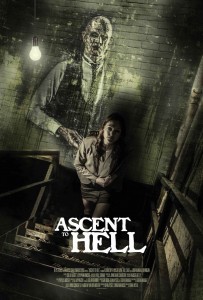 Synopsis:
Kate, an ambitious commercial real estate agent has her sights set on a big contract, with a wealthy investment manager. The deal is lucrative, but it is suddenly on the rocks as Kate and Mr. Browning, and the rest of the people involved in the deal must survive a mysterious supernatural trap. In order to escape with their lives, Kate must find the clues to the building’s past.

The synopsis sounds like a mixture of Cube and Saw III, so the fun will be in seeing who survives the supernatural trap. The story itself is inspired by the Triangle Shirtwaist Factory fire in 1911, which saw 123 women and 23 men lose their lives. Perhaps most tragically, many of the doors and exits were locked, so many of the sweatshop workers jumped from the building’s windows. Expect lots of angry ghosts that are desperate to be freed from their afterlife torment.

Ascent to Hell has been directed by Dena Hysell and stars Azura Skye as Kate, Cayleb Long and Bill Sage. The film is currently being pitched at Cannes film festival as APL has acquired the international sales rights.