THE HAUNTING OF MARY: Film Review 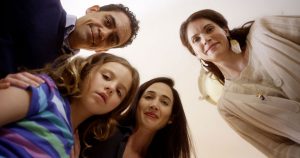 15-year old Mary vanishes when her family visit a lake house. When she returns she has no memory of what happened, but fears she may have lost part of her soul.

There is a heap of potential in this low-budget thriller that has an intriguing set-up and mostly interesting execution. The first scene shows us Mary after the events that lead to her apparent loss of soul as she talks to her boyfriend who begs her to tell him what happened when she was missing. She doesn’t know, however, but does believe that a part of her soul was left behind. The rest of the film plays out like a whodunit thriller as her family and we, the audience, try to decide if this is true or if something else has happened to her. Of course the film’s shift in title to The Haunting of Mary attempts to coax us away from the, let’s face it, obvious answer to the mystery, so it’s a shame that there is no real wonder as to what’s happened. Unless, the film is attempting the ultimate red herring and it truly isn’t about a loss of soul. I suppose you’ll have to watch the film to find out.

As this is more like a whodunit mystery The Haunting of Mary is painfully easy on the scares, but heavy on its determination to drum up a mysterious atmosphere fear filled with questions and purposely crafted deception. This is not a particularly simple film and its aim to remain unpredictable is commendable and shows a certain air of confidence within writer-director Jennifer B. White. For a film with such a low budget – IMDb states it as $700,000- and a feature debut from White, it tackles a lot of narrative strands to further its lack of simplicity. Again, this is worthy of commendation, but much of the plot gets tangled and feels underwhelming and underdeveloped by the time the film ends. It won’t leave you feeling angry with its stupidity, but there is a lot of frustration to be felt with some of the directions the film decides to take. There are coincidences that borderline on the ridiculous and scenes that are simply pointless rewrites of moments we’ve already seen. By the end, you may draw the conclusion that this is almost a family-friendly, watered down version of Insidious; there are zero frights, but there is enjoyment to be had in its fundamental ridiculousness.

Some of the film’s writing feels laughably bad, especially some of the exchanges between the members of the family. There is a lot of expected melodrama here as everyone loses their patience, but instead of increasing the tension and drawing us in further, it edges The Haunting of Mary into made-for-TV territory. It all feels a tad cheap and amateurish as the events escalate; the weepy piano score does nothing to improve the film’s sophistication and the overall tone of the film is a strange one for a supposed horror film. This would probably feel more at home on television at 3pm rather than with an audience of die-hard horror fans, but The Haunting of Mary does something a bit different. If you’d like a decent mystery movie with a supernatural edge, then you could do far worse than by popping this in your DVD player.

The film’s problems become obvious as the story progresses and it draws to its necessary conclusion. There is some unimpressive CGI thrown in for good measure that attempts to steer the film into a more horror-focused place and there is a slither of charm attached to its sentimentality that is still quite watchable. For some, its levels of earnestness and tenderness will be tough to stomach, but its preoccupation with depth and emotiveness, in my opinion, has a welcome home in a story that sees a girl who feels numb; as though she is missing an essential part of her being. 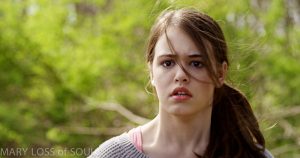 The Haunting of Mary has a creative idea at its story’s centre, but the film suffers from repetition that leads to a meandering of its narrative that drags the film to a crawl, slowing any momentum it previously had to a halt. If the film had refrained from focusing on covering such a huge amount of narrative ground to intentionally lead us in the wrong direction, and opted for a faster pace and tighter story line, this could have been a far stronger and sleeker feature. The originally inventive concept is reduced to tedium because of its ultimate lack of imagination, but there is enough heart and creativity to prevent The Haunting of Mary from being a complete waste of time. It’s a refreshing take on horror that may not be the scariest film you’ve ever seen, but it is certainly an entertaining, complex and promising debut from Jennifer White.